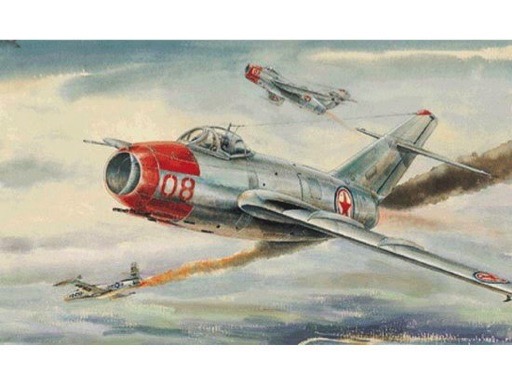 The Mikoyan-Gurevich MiG-15 was built in huge numbers and became the standard fighter of the Warsaw Pact nations. The MiG-15"bis" Fagot-B, the code name given by NATO, was the Soviet Union's first operational swept-wing jet fighter variant developed from the original MiG-15 design. Its maiden flight was in Sept.1949 and mass production began in 1952 with an estimated total of 3,000 produced. This included licensed manufacturing in Czechoslovakia, Poland and especially China, where large numbers of Soviet-built aircraft were erroneously assumed to have been produced from the prototype of the Shenyang J-2.A great number of modifications were made to the MiG-15"bis" such as the night aviation system and all-weather aviation instruments. The MiG-15"bis" operated in the Korean War where it fought against its counterpart, the US North American F-86 Sabre, with impressive results.