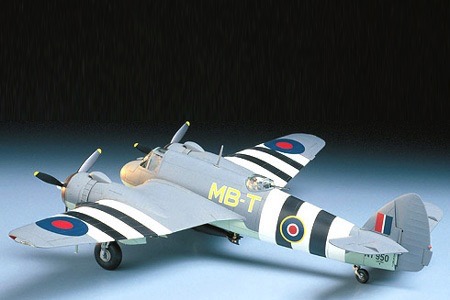 About the Bristol Beaufighter TF.Mk.X
Making use of its sturdy construction and ample weaponry, the RAF's multipurpose Bristol Beaufighter fulfilled a wide variety of duties throughout World War II. At first, these planes showed their effectiveness as night interceptors, until that duty was passed on to the faster Mosquito. The Beaufighter's main role became ground attack and anti-shipping strike.

The next generation of the Beau, the TF.Mk.X, used a 1770hp Hercules XVI engine and heightened anti-ship attack capabilities. Its deadly arsenal consisted on one eighteen-inch torpedo or two 500 lbs bombs, plus eight rocket projectiles. The nose of the plane housed a special navigation system as well as an Al Mk.8 radar for surface and submarine detection. Starting in early 1944, the TF.Mk.Xs were deployed to Coastal Squadrons 144, 235 and 404. In a typical anti-ship attack, the rocket equipped Beaus would first approach the enemies ships at low altitude, firing their rockets. The torpedo equipped Beaus would then follow up, launching their torpedoes at the weak spots of the damaged vessels.

In the Normandy Invasion, the Coastal Squadrons moved their bases to the south of England. From there, the Mk.Xs attacked and sunk many German destroyers and torpedo boats. In March 1945, in the span of only forty-eight hours, Squadrons 236 and 254, flying Mk.Xs, located and destroyed 5 U-boats.