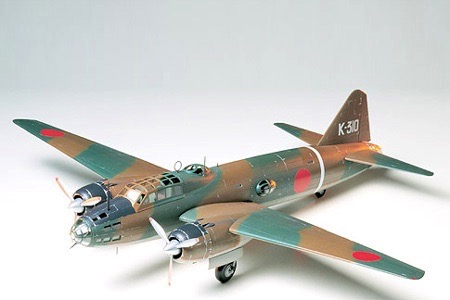 Available(Ships in 2-4 business days)
This product is in stock
at our suppliers, if ordered it
will take a few days to arrive.List price: $85.00
You pay less than: $68.00
Add to cart to see actual sales price.

About the Mitsubishi Isshikirikko Type 11
The Mitsubishi G4M "Isshikirikko", or the type 1 land-based attack bomber, was built to a "range-at-all-cost" specification. In order to compensate for the inferior fleet strength restricted by the London and Washington Treaties, the Imperial Japanese Navy intended to support their naval operations from shore based aircraft.

Bombers with an extremely long range were in dire need for such missions, and this could be achieved by designing the entire wing as integral fuel tanks ad keeping the structure as light as possible, without and armor or self-sealing protection. Defensive weapons and armor protection for the crew were also kept to a minimum. To reduce the drag, bombs or torpedo were stored within a thick, cigar-like fuselage. The thin, wide wing contributed to obtain an excellent stability and maneuverability during flight. Using two 1530hp Mitsubishi "Kasei" type-11 radial engines, the G4M achieved a maximum speed of more than 420Km/h and an outstanding 4,200km or range. However, the 5,000 liters of fuel in the unprotected tanks made the bomber extremely vulnerable, and it soon became known to U.S. gunners as the "one-shot lighter."

With several improvements incorporated, the Isshiki Rikko stable served throughout the pacific War. Including all variants, more than 2,400 units were produced. It was part of the force which sank the British battleship HMS Prince of Wales and battle cruiser HMS Repulse at the beginning of the conflict. In 1945, it was also used in carrying the Japanese surrender delegation to end the war.