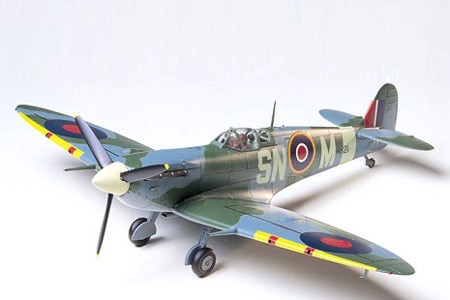 About the Supermarine Spitfire Mk.Vb
The Supermarine Spitfire is regarded by many as the most beautifully designed single seat fighter to appear during the Second World War. Conceived by the renowned British designer Reginald J. Mitchell, the protoype first flew on 5 March 1936. It was an advanced, low wing monoplane with a very slim fuselage and smooth flush riveted metal skin.

The Mk I and II versions demonstrated their formidable performance during the "Battle of Britain", and by early 1941, the majority of fighter squadrons were furnished with this fighter. Improvements were suggested by the pilots and every effort was made to maintain its performance advantages over its opponents. Early improvements resulted in the Mk. V series of Spitfires which became the most widely produced version of all Mk's. The main improvement was the furnishing of three wing armament versions, and the use of the more powerful Merlin type 45 engine, and the "fishtail" flame damping exhaust stubs. The most numerous Mk.V was the "b" winged version with a mixed armament of two 7.7mm machine guns and one 20mm cannon in each wing.

Although the famous elliptical shaped wing was retained on most Spitfires, some Mk. Vb's had clipped wing tips for better low altitude manerverability. The Spitfire went through numerous minor and major changes throughout its production life, and served with distinction on every battle front of the war.