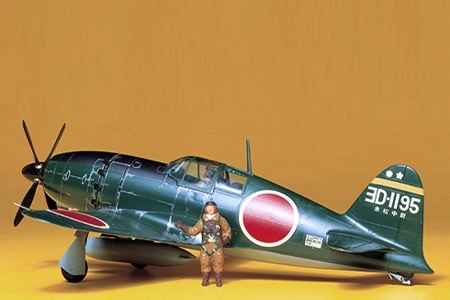 The 14-Shi Interceptor made its first flight at Kasumigaura Airfield on 20th March, 1942. As a result of various tests flights made thereafter, defects such as insufficient power of the Kasei engine, bad vibration of the extended propeller shaft and poor visibility were pointed out. A production type which bettered visibility by shortening the nose and remodelling the canopy and mounted the more powerful Kasei 23 engine equipped with the water-methanol injection system made its first flight on 13th October, 1942. The production type also developed many troubles in the engine and other sections, and it was in December 1943 that the plane was accepted for use under the name of Raiden Type 11 (J2M2). In the meantime, the Raiden Type 21 (J2M3), an anti-bomber fighter which had more powerful armament consisting of four belt-fed 20mm machine guns, was completed in October 1943 and now became the main object of production. The production of the Type 21 totaled about 300.

The Raiden Type 21 first saw action in the Battle of Mariana in September 1944. Subsequently, some were sent to the Philippines and Formosa and took part in actions, but the result was not as good as the Japanese had expected. It was in air defense actions for the mainland by the Raiden unit of the 302nd Air Group based on Atsugi that the Raiden exercised its own power to the full and showed the most brilliant activity. The Raiden unit distinguished itself by shooting down a total of about 300 enemy planes in the short period from the end of 1944 to the end of the war. It owed much of its success to the fact that it could readily obtain necessary material from the nearby Koza naval air arsenal which produced the Raiden, the geographical conditions that its base Atsugi was located near the course of B29 bombers intruding into the Kanto district, and the best consolidated air defense system and air defense control by means of radar network.