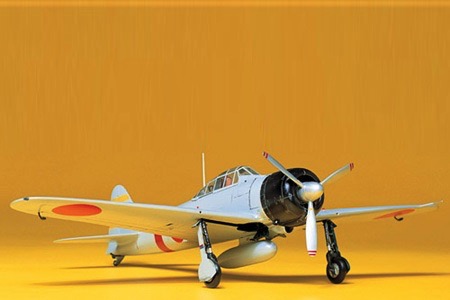 Backordered (Sign up for an email
notification when it's
back in stock!)List price: $16.50
You pay less than: $16.50
Add to cart to see actual sales price.

Birth of the ZERO FIGHTER
In the summer of 1937 Japan started action against China and threw into the front a great number of the newest planes which Japan had created with their original ideas and technique. Concerning fighters in particular, Japan had abandoned biplane type which was counted as the common sense of the then world and already employed the Type 96 Carrier Fighter (96 Kansen) that Japan had produced on the basis of many pieces of new technique and ideas such as all-metal, internally braced low wing monoplane design and the engine cowling designed to reduce air resistance. 96 Kansens always successfully engaed with I-15 and I-16 fighters and SB-2 bombers of Russian make as well as Gladiator fighters of British make. The 96 Kansen appeared as a fighter having a speed as high as 450 km/h and superior maneuverability at the time when conventional fighters of Japan and other nations of the world had a maximum speed of 350 km/h, winning admiration in Japan and abroad. This overthrew the deepfooted view that foreign planes were superior to those of Japan. After the appearance of the 96 Kansen, the modernization of Japan's aircraft industry was rapidly promoted and original planes came to be born.

The battle with China became fierer with years and China transferred her capital from Nanking to Chungkin in the Chinese hinterland to ward off the attacks of the Japanese. The Japanese in pursuit the enemy, particularly the Japanese Naval Air Force, could not escort the bombers as far as to enemy bases in the hinterland because of the 96 Kansen's limited cruising range, and was forced to fly bombers without fighter escort. The Japanese bombers were intercepted by Chinese fighters and easily suffered great losses. The fighting over China taught the Japanese Navy what air fights should be in future and how great would be the loss inflicted on bombers attacking without the command of the air before the air force of other countries became aware of them. The Japanese Navy came to know that fighters should be used not only in conventional interception and air defense missions around their bases but also to escort bombers and other planes as far as to the sky over the target by beating enemy fighters and to secure the command of the air, and realized the importance of fighters capable of doing so.

In October 1937 the Naval Aeronautical Establishment formed a plan for the 12-Shi Experimental Fighter (later called Zero-Sen), a new fighter to succeed the 96 Kansen which was expected to have a maximum speed of more than 500 km/h and apeed well over that of the 96 Kansen. Heavy armament consisting of two 20mm machine guns; maneuverability not inferior to that of the 96 Kansens; and a longcrusing range corresponding to over 6-8 hours; flight at a cruising speed which was based on combat experience in China. The Naval Aeronautical Establishment made a request to Nakajima Aircraft and Mitsubishi Aircraft for competitive trial manufacture. Mitsubishi's deign staff led by engineer Jiro-Horikoshi, who had previously designed the masterpiece plane 96 Kansesn, set to work. Increased cruising range and speed naturally required large horsepower, engine and fuel capacity and therefore large fuselage. In the basic design, the 12-Shi Kansen was two times as heavy as the 96 Kansen. Pilots who attached the greatest importance to maneuverability made complaints and requested that the new fighter should be made smaller. On the other hand, some people took a stand against them saying that maneuverability could be made up for by training and skill and that greater importance should be attached to speed and cruising range which could not be compensated for by training or skill. No definite conclusion could be reached on this matter and Mitsubishi designers continued to be troubled with the severe figures prescribed. Horikoshi and his designers firmly believed that they could save weight by using Extra Super-Duralumin which Sumitomo then developed through increasing conventional duralumin in strenght and by taking other drastic measures for lightening the fuselage. They proposed the view to the Naval Aeronautical Establishment and gained the approval.

Design work and trial manufacture went on smoothly after that, and the first flight was successfully made on 1sr April, 1939. A number of experiments and improvements were repeated: The engine was later changed from the Mitsubishi Zuisei to the Nakajima Sakae and a constant speed 3-bladed propeller was employed in place of the 2-blader. At the request of field units which were unable to put up with losses successively inflicted on their bombing squads, fifteen 12-Shi Kansens under the command of Lieutenants yokoyama and Shindo were sent to the Chinese Continent in July 1940 just before the new fighter was officially accepted for production. At the end of July, the 12-Shi Kansen was named the Type O Carrier Fighter Model 11 after the last figure "O" of the 2,600th year of the Imperial reign and officially accepted for production. Zero-Sens which were sent tot he Chinese Continent joined the 12th Air Fleet and played the role of escorting bombers to the hinterland that was impossible for the 96 Kansen. They made an extended shuttle flight of more than 1,300 km, proving that they were able to escort bombers satisfactorily. On 13th September, thirteen Zero-Sens staged an air battle with twenty-seven I-15 and I-16 fighters over Chungkin and shot down all the enemy fighters in an instant with no loss to the Zero-Sens. This was the first and victorious campaign of the Zero-Sen. The appearance of the Zero-Sen gave Japan the complete command of the air over the Chinese continent.

Outbreak of the Pacific War
On 8th December, 1941, "Type 97 Carrier Torpedo Bomber" from the aircraft carriers Akagi, Kaga, Soryu, Hiryu, Shokaku and Zuikaku themselves over Hawaii under the escort of Zero-Sen fighters. While the Zero-Sens commanded the air, the attacking units delivered attacks agains the U.S. Pacific Fleet in Pearl Harbor and air bases of Hawaii. The success of the surprise attack was wired to the whole world in a code "Tra, Tra, Tra." This sparked the Pacific War. The Japanese made a brilliant drive as far as to the Aleutian Islands in the north and the Indian Ocean. The Zero-Sen fought in the van of advancing Japanese forces, gained mastery over the two oceans and raged about freely. The Allied Powers including the United States and Britain that had not been informed of the existence of the Zero-Sen were surprised at its high performance and the "Terrible Zero Fighter" made officers and men's blood run cold.

In air battles around the Phillipines, Zero-Sens left the Takao base of Formosa together with "Type 1 Attak Bomber" to make an extended shuttle flight of more than 1,600 km over the ocean and had aerial flights with British Buffalos and Hurricanes as well as American P-36s and P-40s which tried to intercept the Japanese planes. The fights resulted in a signal victory for the Zero-Sens. While the number of Zero-Sens lost was only a few, about 300 Allied planes in the Phillipines including B-17 bombers, which were then called impregnable air fortresses and the Americans were proud of, were shot down in only a few days. The Allies responded to the Zero-Sen with the new Ship-Based Fighter F4F Wildcat of the United States Navy and the Spitfire of the Royal Air Force. Particularly the FrF produced contemporaneously with the Zero-Sen was much expected a sthe same ship based figher having almost the same engine horsepower. The F4F was no match for the Zero-Sen in fighting maneuverability. In the attack of Port Darwin, Australia, from the Rabaul base, the Zero-Sen showed superior circling ability and overwhelmed the Britain's proud spitfire in dogfights. The spitfire was a fighter which had beaten the Messerschmitt Bf-109 of the German Air Force in dogfights by making the most of its proud circling ability. Thus the Japanese fighter was requted to be "Invincible Zero-Sen". The Zero-Sens which achieved these victories in the initial stage of the Pacific War were called Model 21, an improved version of the early Model 11 that showed activity over the Chinese continent. The wings of the Model 21 were designed to permit 50cm of each tip to fold upwards to facilitate carrier stowage. Zero-Sens of the Models 11 and 21 manufactured and prepared before the beginning of the Pacific War totaled only about 400.

After the middle stage of the war, the Americans came to use against the Zero-Sen a great number of new planes such as the Ship-Based fighter F6F Hellcat mounting and engine of 2,000 hp class nad the P-38, P-47 and P-51 fighters, and gradually regained their power. Meanwhile, a number of improved versions of the Zero-Sen were also produced, but the Zero-Sen was almost the only one Japanese fighter type that fought through the war. The production continued to the end of the war and totalled to more than 10,425 which was an all time record production in the Japanese aircraft history. More than half of them- 6,545 -were manufactured by Nakajima Aircraft between January 1941 and the end of the war. The Nakajima production included 327 Zero-Sens with float named the Type 2 Seaplane Fighter.

Zero-Sen at the World's Highest Level
Some of the distinguished features of the Zero-Sen which achieved the brillian war results mentioned before are as follows: 1. Long cruising range. This owes much to the low fuel consumption of the reliable Nakajima Sakae engine. 2. Good maneuverability and circling ability obtained through drastic weight reduction plus speed and acceleration well matching with them. Strong in dogfights. 3. Powerful 20mm machine guns.

The Zero-Sen was well balanced in all these features and the performance was above the world level. The fact that Zero-Sen pilots gained battle experience in China and were very skilled also contributed to the "Invincible Zero-Sen".