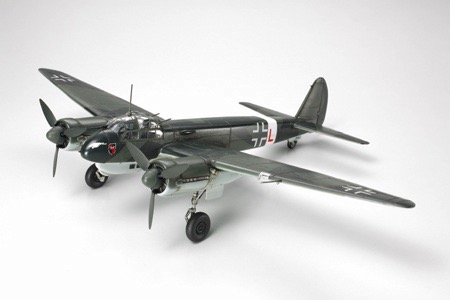 DISCONTINUED This product has been discontinued
and is no longer available.List price: $44.00
You pay: $29.99
(All prices in U.S. Dollars)

About the Junkers Ju-88
The Ju-88 was originally designed in 1936 as a fast medium bomber capable of outrunning enemy fighters, but proved so capable that it was also adapted for torpedo bomber, tankdestroyer, reconnaissance, heavy fighter, and nightfighter roles, making it one of the most versatile aircraft of WWII. It proved to be a very capable aircraft in all of the roles it was assigned to, and was an exceptionally good nightfighter with its good balance of speed and armament, and its size was also sufficient to carry the latest radar equipment. The first Ju-88C nightfighters were based on the normal bomber versions, with the only difference being a new streamlined solid nose for its machines guns and cannon. Later variants featured radar and upward-firing Schrage Musik cannons that made it an even more effective nightfighter.