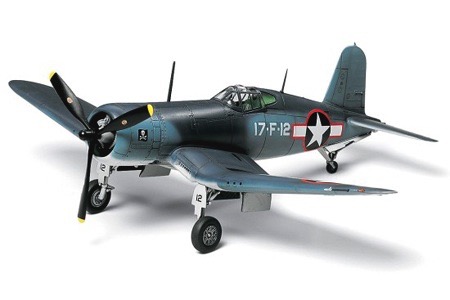 DISCONTINUED This product has been discontinued
and is no longer available.List price: $29.00
You pay: $19.89
(All prices in U.S. Dollars)

About the Vought F4U-1 Bird Cage Corsair
In 1938, the U.S. Navy issued a call for a new high-speed and high-altitude capable single-seat carrier based fighter plane to replace the Grumman F2F/F3F biplane. The Vought aircraft company rose to the challenge with their F4U Corsair, which mounted a massive 2,000hp engine and was fitted with the largest propeller yet used on a fighter. It was instantly recognizable for its inverted gull wings, which were designed to enable short and sturdy landing gears, while still providing enough clearance for the propeller. The F4U was the first U.S. fighter to exceed 400mph (644km/h) in level flight and was one of the most successful American planes introduced during WWII. The first production model F4U-1 was nicknamed "Bird Cage" for its frame-like cockpit canopy, and was deployed to U.S. Navy and Marine Corps squadrons in the Pacific as a land and carrier based fighter.