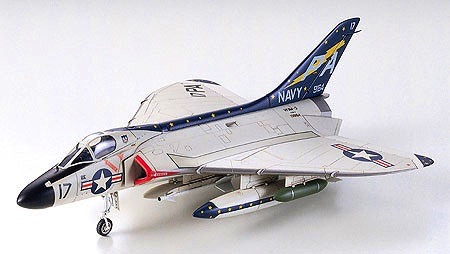 Douglas F4D-1 Skyray
Towards the end of World War II, many information about advanced aeronautical technology were captured in Germany by the U.S. Forces. One of them was an analysis of the studies carried out by Dr. Alexander Lippisch on delta winged aircraft. Based upon the information, the Douglas firm developed the F4D Skyray, the only operational interceptor with delta wings in the U.S. Navy. Starting the design in 1947, Douglas was awarded a contract for the construction and testing of two prototypes in December 1948. The first prototype took off on its maiden flight in January 1951. The second prototype flew shortly thereafter, and the airframe set two new world records, absolute speed record of 1,211 km/h and 100km closed course record of 1,171km/h, in October 1953. Having numerous improvements and refinements, the first production F4D-1 made its maiden flight in June 1954 and entered squadren service in April 1956. The distinctive 50 degree sweptback wings with round tips were equipped with leading edge slats and trailing edge elevons. A set of trimmers were installed on the inboard trailing edges of the wings. The outer portions of the wings could be folded upwards by oil pressure for carrier stowage. Although the Skyray never saw any combat, it proved its high capability as an interceptor with numerous world records and scramble actions in Taiwan in response to crises in the late 1950's.