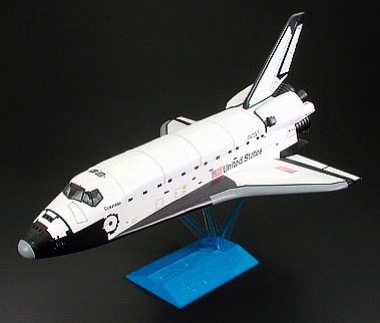 Shuttle between the Earth and Space
It took billions of dollars to launch various artificial sattelites and spaceships. But all of these things were discarded after one-time use. This was too uneconomical and made it rather difficult to utilize space for human beings. The space shuttle is a new means of transportation devised to solve the problem and promote space development more economically. The shuttle means a bus, truck, train, etc. making frequent trips back and forth. The space shuttle, as the name implies, is a linear between the Earth and space and is often called "space ferry"...

Particulars of Orbiter
The Orbiter, which is the most important constituent of the space shuttle, is a spaceship shaped like a stocky passenger plane with a delta wing. The overall length is 37 meters and the span is 23.7 meters. After reentry into the atmosphere, the orbiter can glide down and make a landing unlike conventional spaceships. After maintenance and repair, it can be launched again.

Most of the surface of the orbiter is covered with tiles made of silica of very high purity. These tiles are classified into two groups. One for high temperature and the other for low temperature, and these are used accordingly. Parts which become extremely hot such as the nose and the front edge of the wing are covered with heat resistant material of reinforced carbon. These heat resistant materials protect the orbiter from heat of friction which exceeds 1,400 degrees celcius in some parts at the time of launching or reentry into the atmosphere. Thus, they make it possible to use the orbiter no less than 50 or 100 times.

The fuselage of the orbiter is partitioned into the cockpit and crew compartment in front, payload compartment at the center for carrying cargo, and engine room at the rear. The crew are four to seven. In addition to two pilots and one mission controller who controls the flight plan, the orbiter can carry four scientists and payload controllers who load and unload cargo for operation and experiments in space. This is a characteristic feature of the orbiter not ever seen in conventional spaceships. Furthermore, the scientists need only a few weeks training before getting in the orbiter. No space suit is needed inside it and they can act in ordinary clothes.

The payload compartment is of a cylindrical shape 4.5 meters in diameter and has a cargo rack 18 meters long. Its top consists of large doors which open right and left from the center. Various things are put in this compartment. the maximum capacity is 29.25 tons.

From Exploration to Utilization of Space
On October 4, 1957, the Soviet Union succeeded in launching Sputnik I, the first artificial satellite in the world. And on January 31, 1958, the United States launched Explorer I. Thus human beings took the first step to the advance into space. Early in the 1960's, manned space flights were repeated with the Russian Vostok and American Mercury spaceships as the start. In 1969, Project Apollo at last placed astronauts on the moon. Human beings tried to send space probes to other planets. To begin with, they were sent to Mars and Venus which are near to the Earth. The next targets included Mercury and Jupiter, and Saturn and Uranus which are very far from the Earth, and even the outside of the solar system. At the same time as such challenges to unknown space, a large number of meteorological sattellites and communication satellites were launched. And in the 1970's, the Skylab Project of the United States and the Soyuz and Salyut spaceships of the Soviet Union let astronauts stay in space for a long time and make observations and experiments in the fields of astronomy, chemistry, biology, etc. While the challenges to space and explorations of it were continued, attempts were made to utilize space for human life and some of them have been already successful. To promote the utilization of space further, the Space Shuttle Project was started in 1972 by NASA (National Aeronautics and Space Administration)of the United States. Great hopes are entertained of the project which will open a new era of space.

NASA's spacecrafts are currently used for human spaceflight missions. The Orbiter is commonly used as a means of transportation for astronauts and is also used for delivery of scientific equipment, satellites, and so on. The Space Shuttle is well-known around the world, and gets plenty of attention in Japan thanks to the exploits of Japanese Astronauts Mr. Mamoru Mori and Ms. Chiaki Mukai. Mr. Mori is a veteran of two space flights and trained and worked as a Payload Specialist. Ms. Mukai has also taken part in two space flights as a Payload Specialist, and is famous for being the first Japanese woman to go into space.