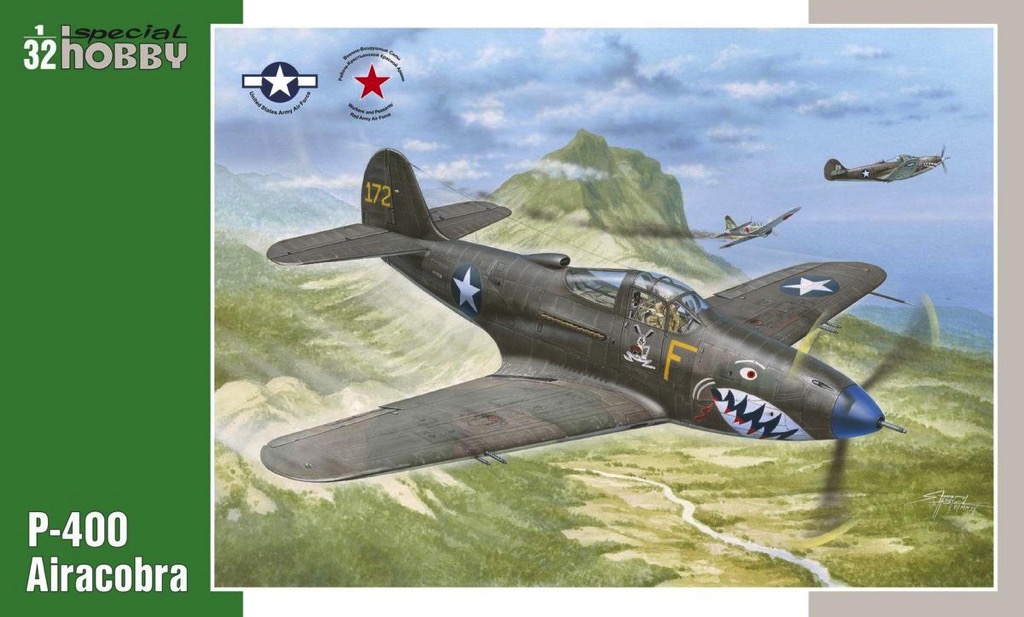 Following the Japanese attack at Pearl Harbor, the United States of America declared war on the Japanese Empire which led to short-lived but drastic reduction in weapon supplies to foreign countries. The USA seized plenty of aircraft that had been ordered by Sweden and Great Britain for its own usage. Amongst these planes were also the Caribou Mk.I (later to be renamed the Airacobra Mk.I) fighters for the British, which was an export model of the Bell P-39 Airacobra fighter. The Army Air Force renamed these planes the P-400 and put them to the service besides its standard P-39 machines and the seized machines were used also in Africa and in the Pacific Theatre of Operations. Some of these machines were later delivered to the USSR under the Lend-Lease act, where also the British machines ended up. The P-400 differed from the US versions by having a 20 mm cannon in the nose and their exhausts were of 12-stubs type.

In the 1/32 P-400 Airacobra model you can find in total seven frames of plastic parts, a frame with clear parts, resin casted exhausts and gunsight, two PE-part frets, one standard and the other one is pre-coloured. The camouflage options represent Airacobras used during heavy fightings in New Guinea, Africa and on the Eastern Front. The camouflage option A shows the 80th FS/8th FG machine with jaws on its nose and a fighting rabbit on the cockpit door. The starboard wing was replaced in the field and it wore a standard British camouflage pattern, unlike the rest of the machine which remained in the original camouflage. The Camo B option presents another machine from New Guinea, this time it is a 35thFG machine wearing a British camouflage, Donald Duck with a sporting gun cartoon and a name Macushla. The Camo C option shows a British Airacobra used as a bomber plane in Tunisia with the 91st FS/ 81st FG. Its national insignia have yellow borders used on the African battlefield and the cockpit door is adorned with a drawing of an attacking eagle. The last camouflage option, the Camo D, shows a Soviet Ace Ivan Dimitrievich Gajdaenko 9th GIAP machine in a later type of British camouflage of grey and green (ie the Day Fighter Scheme). It fought in the Port of Murmansk area in 1943. The British roundels are overpainted and the machine also wears a victory markings.