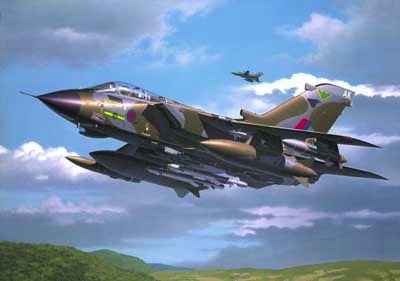 DISCONTINUED This product has been discontinued
and is no longer available.List price: $22.95
You pay: $17.69
(All prices in U.S. Dollars)

The Tornado is one of the most successful and versatile NATO weapons systems and has already proved itself in many conflicts. At the beginning of any conflict RAF Tornados equipped with ALARM missiles are among the first allied aircraft to fly their hazardous air defence mission into enemy air space. They are followed by other Tornado units that can safely fly in and make precision bombing attacks on enemy positions. With their large 2250 litre auxiliary tanks, the RAF Tornados also have an abnormally long range. The max. speed is 1340 km/h at 150 m.