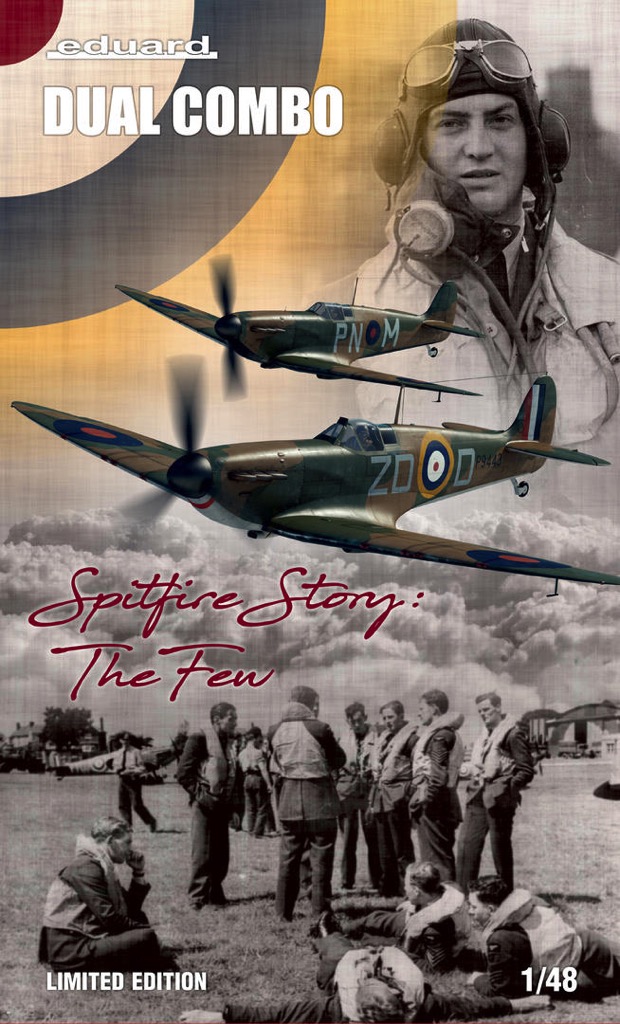 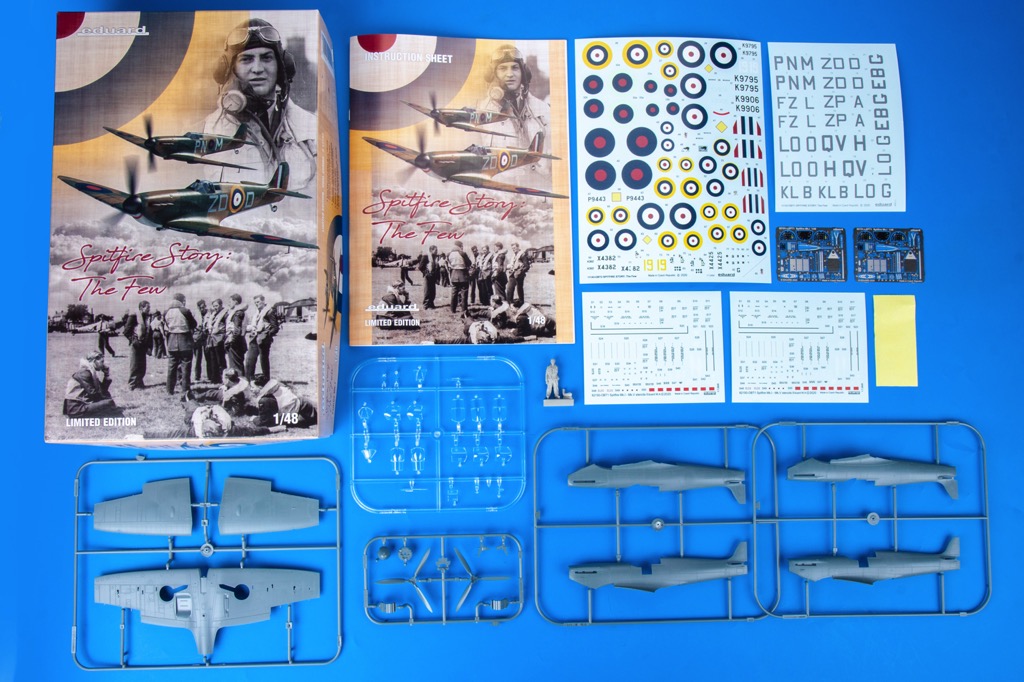 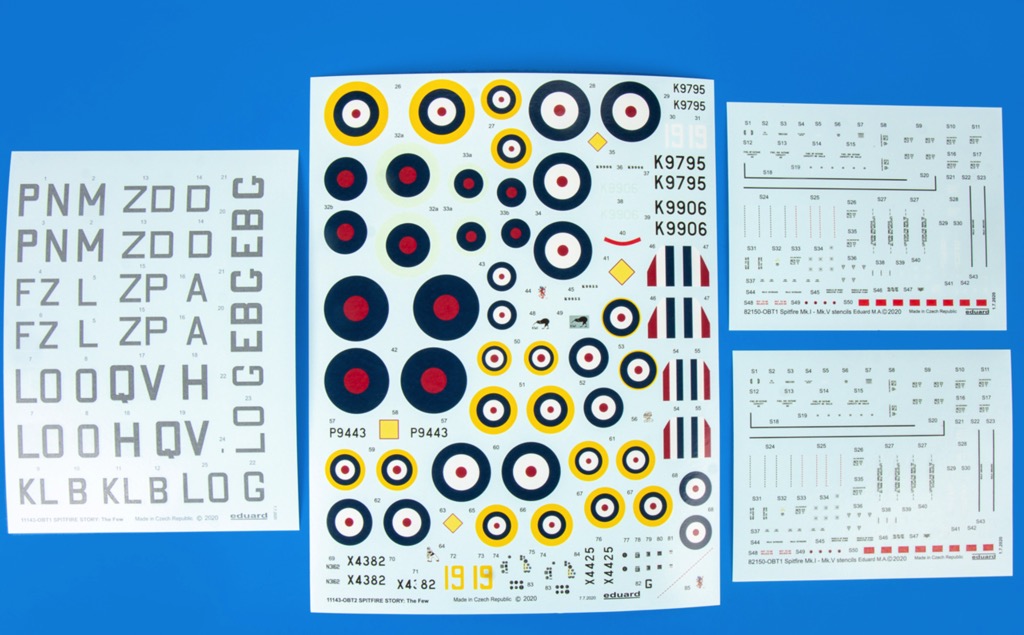 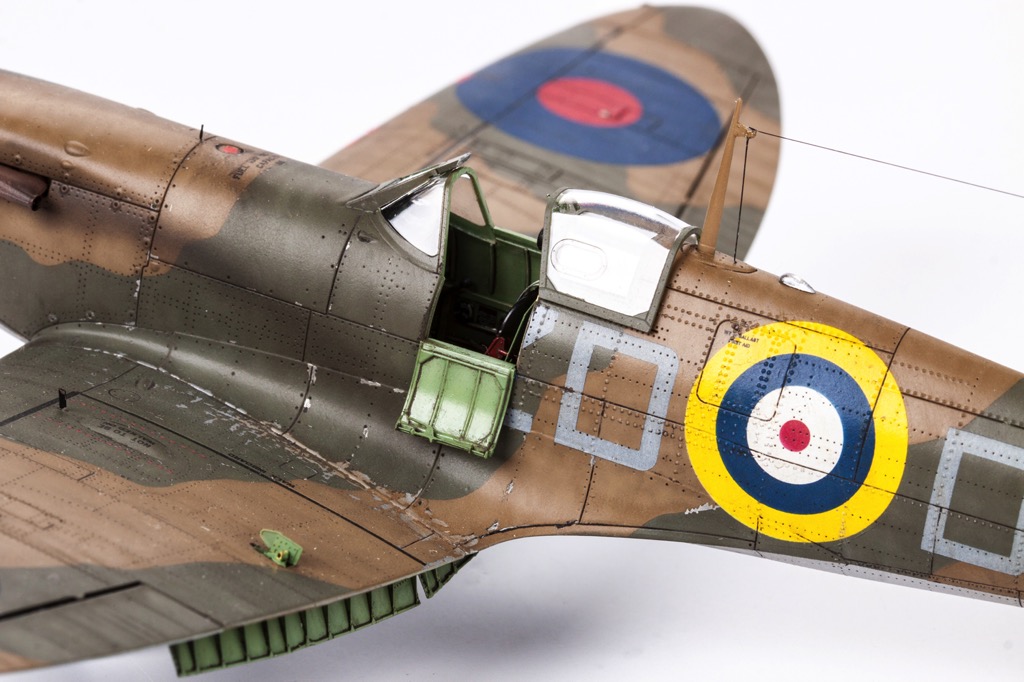 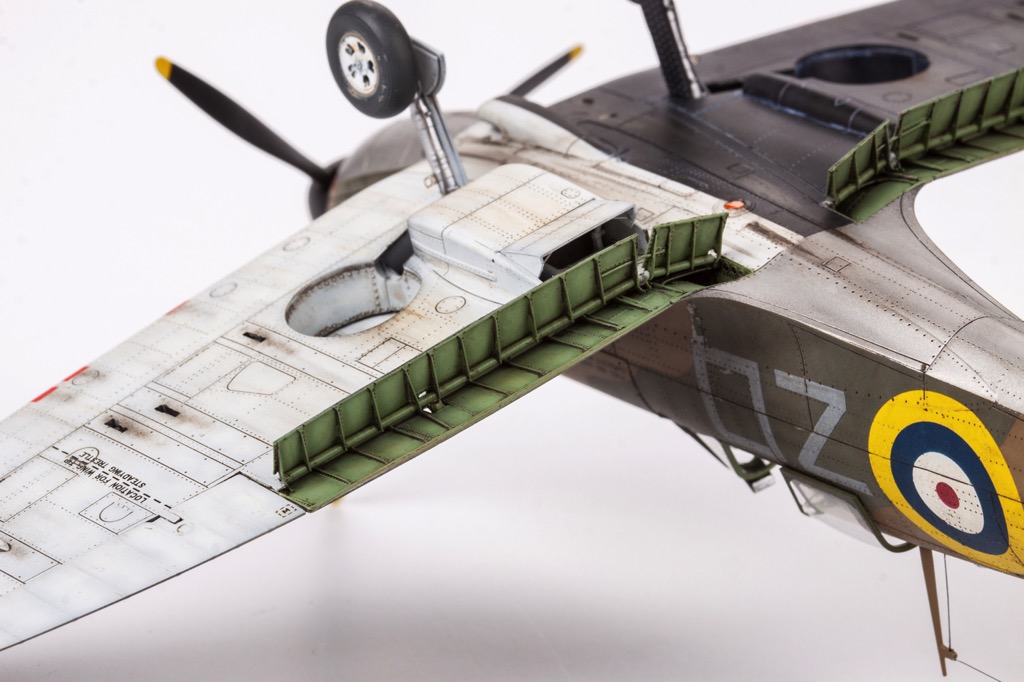 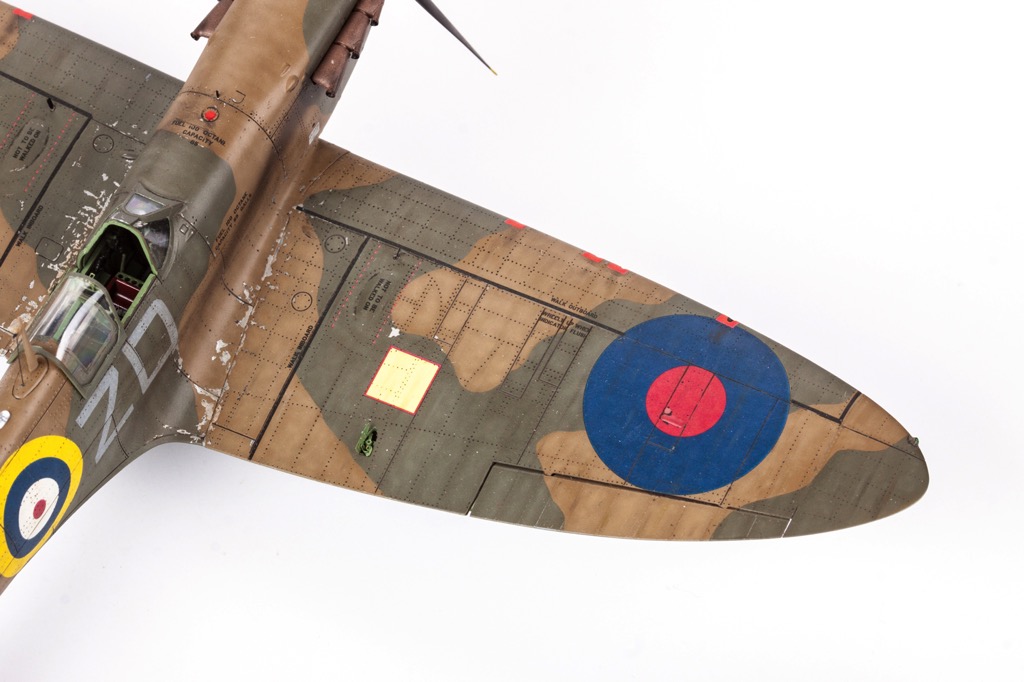 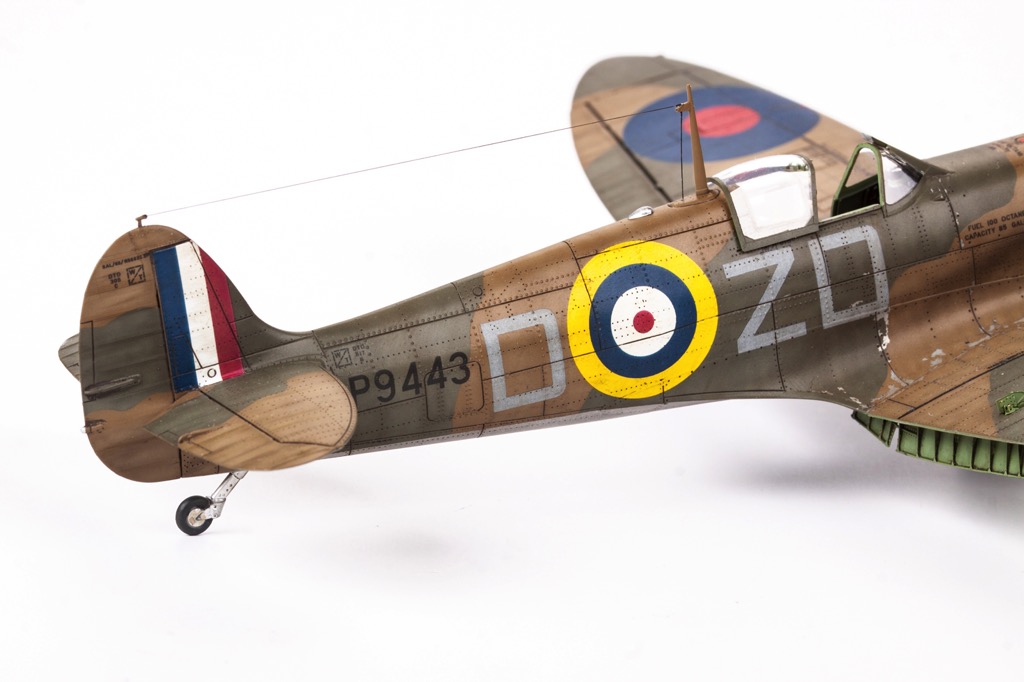 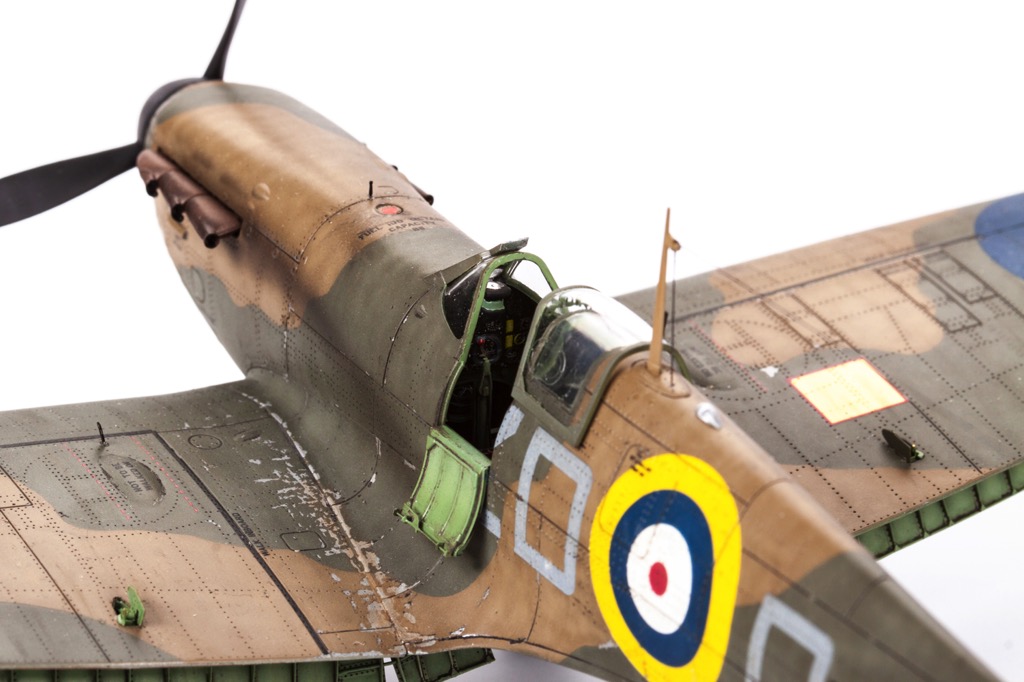 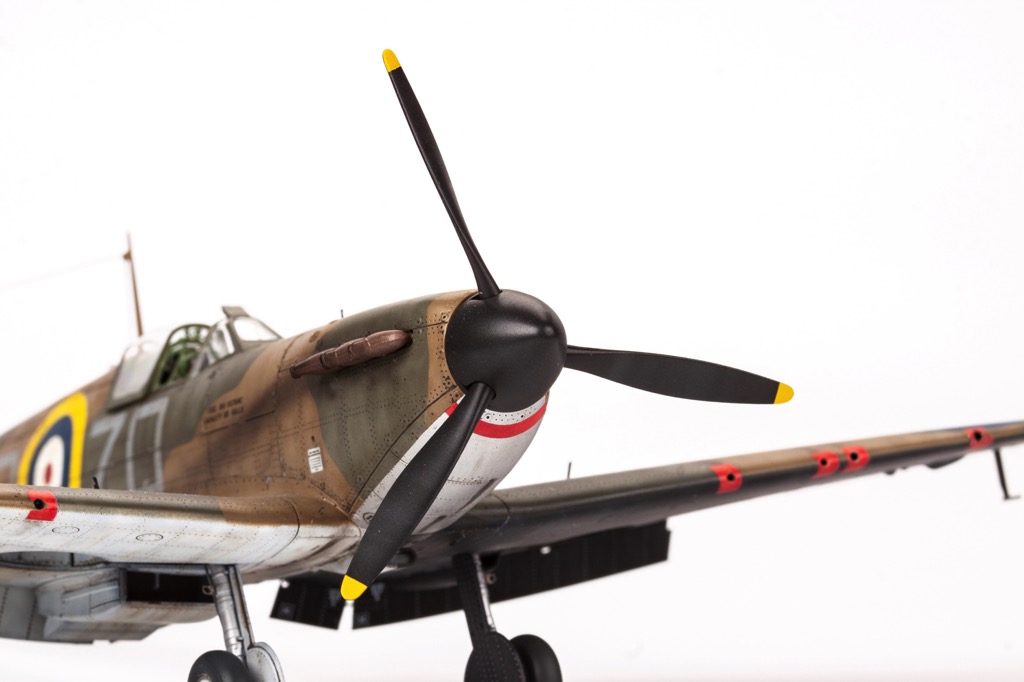 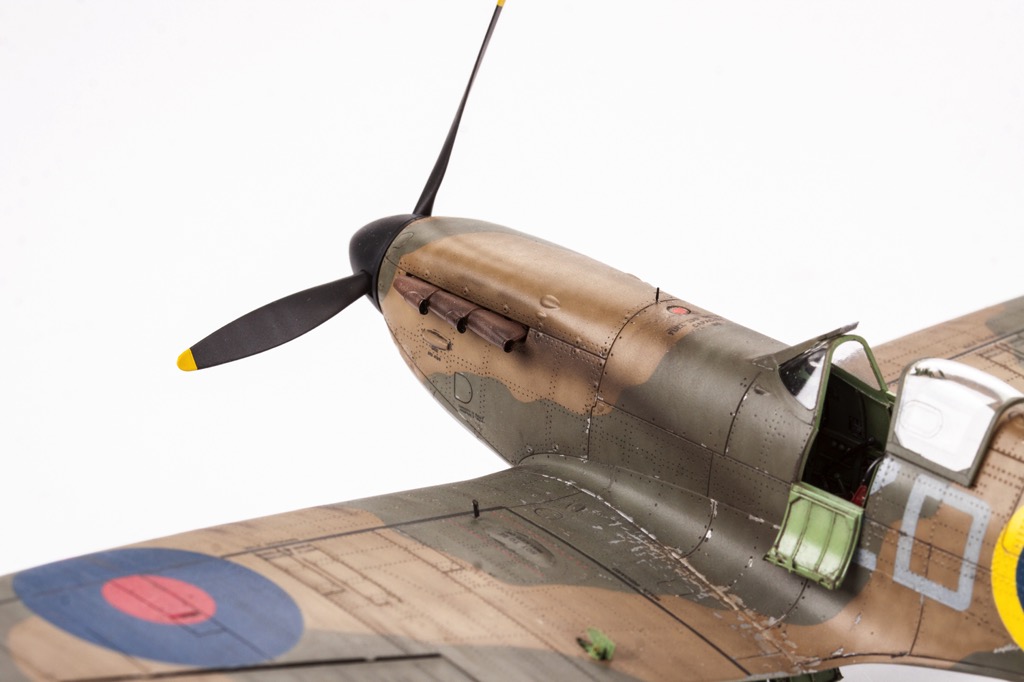 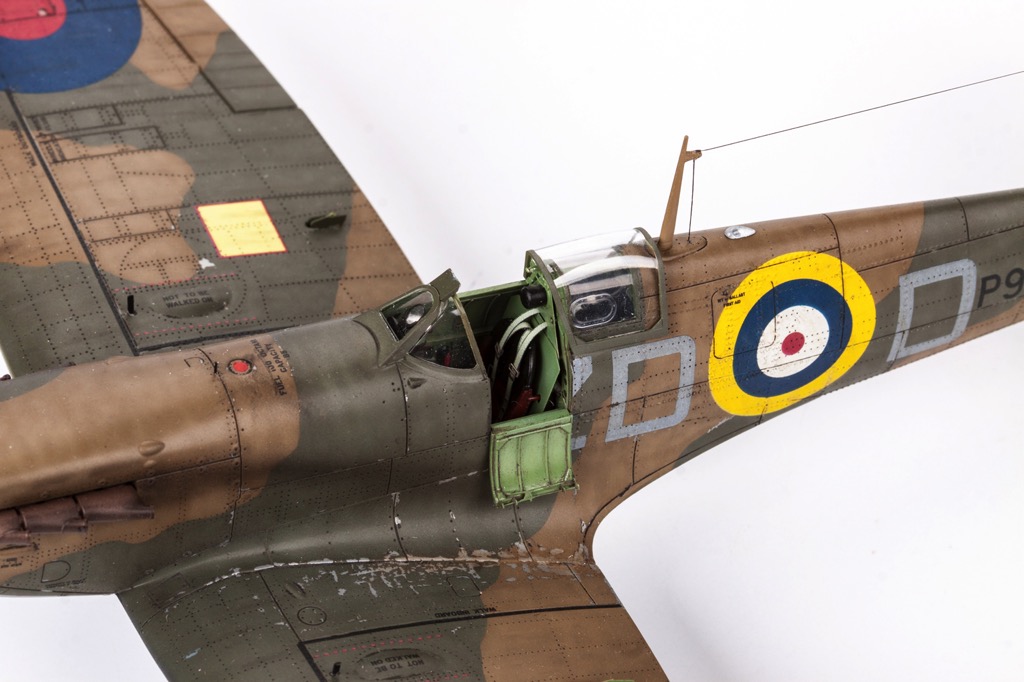 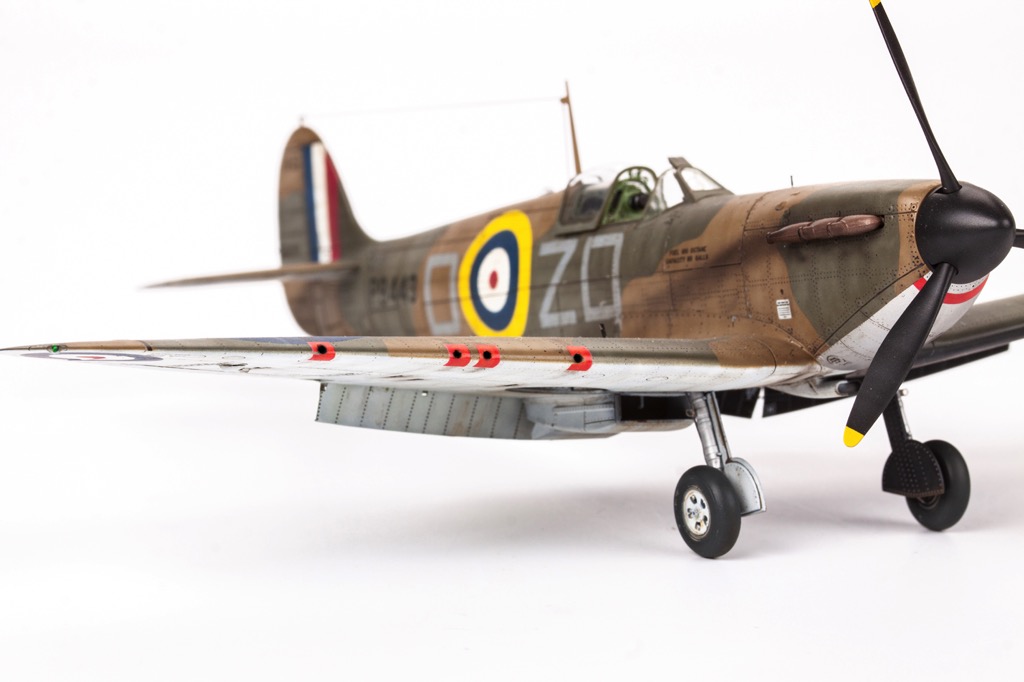 Includes parts for 2 kits, with photoetched parts, painting mask, and markings for:

K9795, No. 19 Squadron, RAF Duxford, Cambridgeshire, October 1938
No. 19 Squadron was the first RAF unit to reinforce its arsenal with Spitfires. Two reasons influenced this decision: the airfield dimensions in Duxford and the personality of S/Ldr Henry Cozens, who was a qualified aircraft engineer, fully competent to collaborate with Supermarine engineers on the improvements of the Spitfire design. Cozens himself flew the Spitfire K9789 for the first time on August 11th, 1938. The represented camouflage and markings were used by No. 19 Squadron on October 31st, 1938, when new unit's Spitfires were officially photographed from a Blenheim Mk.I. Note the Cozens K9794 was already equipped with the bulged canopy, which was officially introduced a few months later in January 1939. The squadron suffered its first loss on November 3rd, 1938, when P/O Sinclair, who was later a CO of A-flight of No. 310 (Czechoslovak) squadron, destroyed his Spitfire Mk.I K9792 during landing. Pay attention to the interesting feature on the leading edge of the vertical stabilizer, which prevented the parachutes strings to entangle in case of an emergency bail out.

No. 41 Squadron, RAF Catterick, North Yorkshire, Spring 1939
The No. 41 Squadron acquired their first two Spitfires Mk.I K9831 and K9832 on December 30th, 1938 as third Fighter Command unit. This Spitfire Mk.I PN-M has a colorway from the spring of 1939, with red-blue national insignia on the upper surfaces, former white and yellow rings are oversprayed with camouflage color. Technically the aircraft displays first clean serial finish, with Merlin II engine, Weybridge two-blade wooden propeller, flat canopy, and the original old style Pitot tube. The plane doesn't have the machine gun heating and was flown without any armor. This aircraft had an external camera gun on the upper side of the right wing. Until September 3rd, 1939, the day when UK declared war to Germany, in total 306 Spitfires Mk.I were brought into RAF, 187 of them served in eleven Fighter Command squadrons. Of these units, only seven were battle-ready two days after the war began, and four others were in the process of reinforcement and upgrades. 36 Spitfires were lost before the war during various accidents. After the war broke out, all the Spitfire equipped squadron remained based in British islands as part of Air Defense of Great Britain.

K9906, flown by F/O Robert Stanford Tuck, No. 65 Squadron, RAF Hornchurch, Essex, Summer 1939
This Spitfire Mk.I already has the bulged canopy, three-blade propeller De Havilland and machine-gun heating. Still remains without any armor, having the old type of Pitot tube and a mechanical gunsight. F/O Tuck is the most accomplished fighter ace in our lineup with 29+2 kills. In May 1940 he was reassigned to No. 92 Squadron, his first three kills came at in May 1940 over Dunkirk. He was promoted S/Ldr of No. 257 Squadron flying Hurricane Mk.Is on September 11th. It is rumored one of his victims was the future fighter ace of Luftwaffe, Hans-Joachim Marseille (September 23rd, 1940). He was shot down near Boulogne sur Mer and captured on January 28th, 1942. He participated in the organization of the Big escape In Stalag Luft III POW camp in Sagan, but just before the escape he was transferred to Belaria camp. On the February 1st, 1945, he managed to escape during camp evacuation and joined the Russians, when his knowledge of the Russian language was an essential advantage. He retired from the RAF in Fifties and took up farming. During the shooting of Battle of Britain movie he befriended Adolf Galland, he was his son's godfather. He died on May 5th, 1987 at the age of 70.

K9955, flown by F/O Archibald Ashmore McKellar, No. 602 Squadron, RAF Drem, East Lothian, Scotland, March 1940
This plane already has a bulletproof windscreen and the new pitot tube, GM 2 gunsight, but still has older type of the antenna mast. The pilot seat is still without any armor. Note the anti-spin slat on the side of the fuselage fuel tank. No. 602 Squadron had their Merlin II engines altered for 100 octane fuel already in February 1940. No. 602 Squadron, part of the Auxiliary Air Force, acquired Spitfires before the war. On the 16th of October 1939 it took part in the shooting down of the first German aircraft over British territory during the KG 30's air raid on Scapa Flow, and on October 28th shooting down the first German aircraft over the British soil, He 111 over Firth of Forth. Some sources claim McKellar had a part in these takedowns. In the June 1940 he joined No. 605 Squadron equipped with Hurricanes to become Squadron Leader on September 11th. He accomplished 15 kills during the BoB. On October 3rd, 1940 he got 5 wins during a single day, (all above Bf 109E) and became one of 28 Allied Aces in the day. S/Ldr A.A.McKellar died a day after the Battle of Britain officially ended, on November 1st, 1940. It is assumed Hptm. Wolfgang Lippert, CO of II./JG 27, shot him down.

N3180, flown by P/O Alan Christopher Deere (RNZAF), No. 54 Squadron, RAF Hornchurch, Essex, May 1940
No. 54 Squadron was the only RAF unit equipped solely with Spitfires Mk.I with Rotol RMS 7 constant speed propeller. The New Zealander Deere, who took first flight in Spitfire on March 6th, 1940, participated in the first operation of the No. 54 Squadron, providing air support for the retreating forces in Belgium on the May 16th. On the May 23rd, during the escort of F/Lt. J.Leather, flying in Miles Magister for the No. 74 squadron commander, S/Ldr L.White, shot down near Calais, Deere downed his first two Bf 109s. On the 26th of May, the operation Dynamo began in the evening, the evacuation of Dunkirk. On the 28th of May, Deere had to make an emergency landing on a Belgian beach but managed to get back to Hornchurch after a 19hour trek. After the evacuation of Dunkirk ended, the No. 54 squadron joined the BoB, in which Deere got 7 confirmed kills. During World War Two Deere went through a lot of leadership posts. His total score is at 22 confirmed kills (some sources claim 17 only). He retired as Air Commodore in 1967. A.C.Deere, OBE, one of the most famous New Zealand and British pilots, died on 22nd of September 1995 in the age of 77.

P9443, flown by F/Lt Douglas Bader, No. 222 Squadron, RAF Duxford, Cambridgeshire / Kirton in Lindsey, Lincolnshire, early June 1940
Legendary Douglas Bader lost both his legs after an aerobatics accident with Bristol Bulldog Mk.II on the December 14th, 1931. He returned to RAF in January 1940, while served with No. 19 Squadron and then from May 1940 with No. 222 Squadron. He claimed his first Bf 109 during operation Dynamo. He was named the Squadron Leader of No. 242 Squadron, equipped with Hurricane Mk.Is on June 28th, 1940. He was a supporter of Big Wing tactics. Bader accomplished 11 confirmed kills during the BoB. On the March 18th, 1941 he became CO of Tangmere Wing, flying the offensive sweeps over France. He was shot down in Spitfire Mk.Va (signed DB, code name Dogsbody) near Saint Omer and captured on September 9th, 1941. He lost his prosthetic leg due the bail out, the delivery of a replacement by RAF Blenheim was managed by A.Galland. Bader was, despite his escape attempts, until April 1945 imprisoned in Oflag IV-C in the Colditz castle. After retiring from RAF in 1946, he worked for Shell company. As a Member of Parliament, he was infamous for his controversial opinions. He died after fatal heart attack on September 5th, 1982, after a dinner to honor of A/M A.Harris.

K9953, flown by F/Lt. Adolph Gysbert Malan, No. 74 Squadron, RAF Hornchurch, Essex, June/July 1940
No. 74 Squadron reinforced their Spitfires in February 1939. A South African Adolf "Sailor" Malan, whose original job was truly a sailor, entered the war on September 6th, 1940, through infamous Battle of Barking Creek incident, where his A Flight accidentally shot down two Hurricanes of No. 56 Squadron. During operation Dynamo accumulated 5 confirmed kills and in the night from 19th to 20th of June managed to destroy two He 111. Malan was opposed of line-astern formation proposing more flexible finger-four formation. Legend says that he damaged the plane of Werner Molders and even injured him on July 28th. On August 8th, he became S/Ldr of No. 75 Squadron, which achieved 38 kills during four sorties led by Malan on August 11th, 1940. That event is known as "Malan's 11th of August". Malan had 16 confirmed kills in the BoB. Until the end of his career in 1941 he accumulated 27 confirmed kills and 7 shared kills. He was an amazing tactician, and famous with his Ten rules of air combat. After his retirement in 1946 he became a farmer in South Africa. He was politically active as an opponent of apartheid. He died on September 17th, 1963 at the age of 53.

N3162, flown by P/O Eric Stanley Lock, No. 41 Squadron, RAF Hornchurch, Essex, United Kingdom, August/September 1940
Eric Lock entered No. 41 Squadron as a rookie in June 1940 and on August 15th got the first of his 21 kills in the Battle of Britain, which made him the most successful Allied fighter ace of the Battle. On November 17th, 1940, he was seriously injured on his right arm and both legs by the Bf 109E fire. During following three months he underwent 15 difficult surgeries and spent next three months in a rehabilitation center in Royal Masonic Hospital, in care of famous pioneer of the plastic surgery Archibald McIndoe who helped him to recover. He came back to No. 41 Squadron in June 1941 and was promoted to Flight Lieutenant in July became the leader of B Flight of No. 611 Squadron. On August 3rd, 1941, after returning from a Rhubarb type action, he attacked a German column near Pas de Calais as has been MIA ever since. He was probably sh