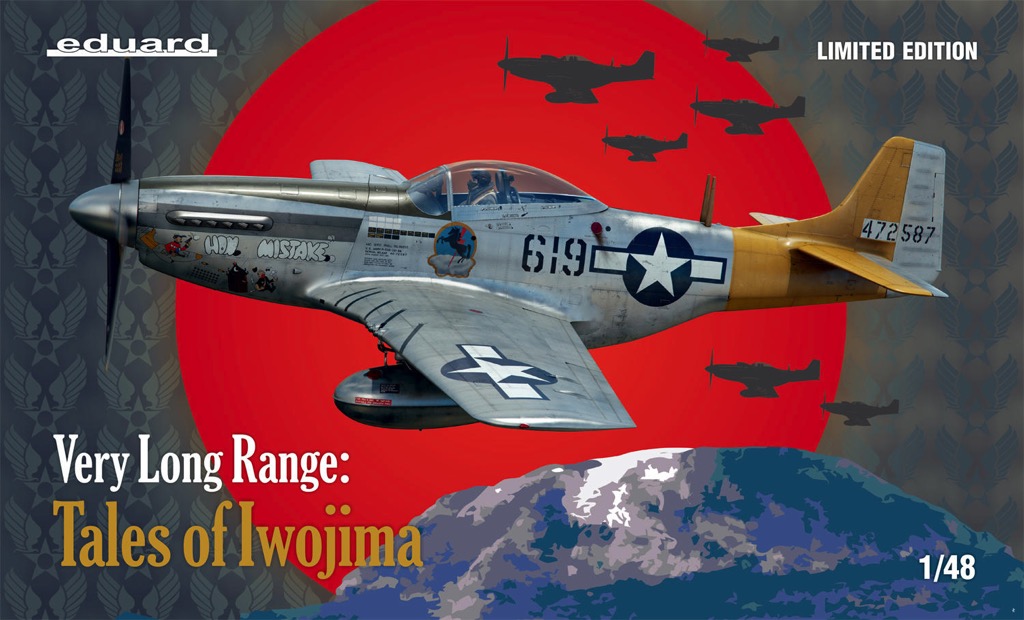 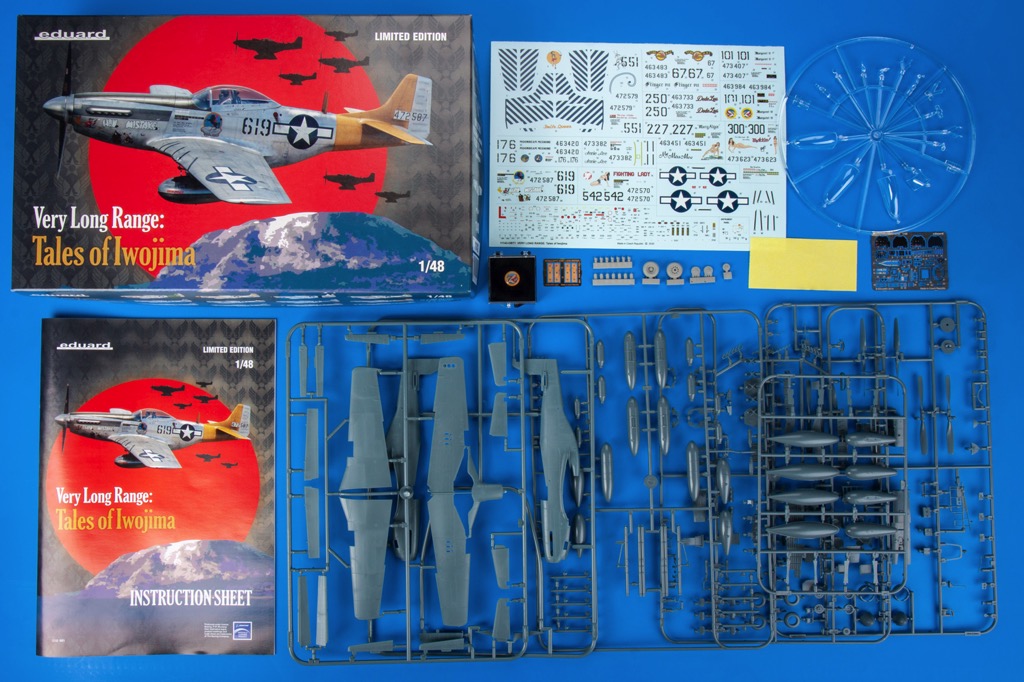 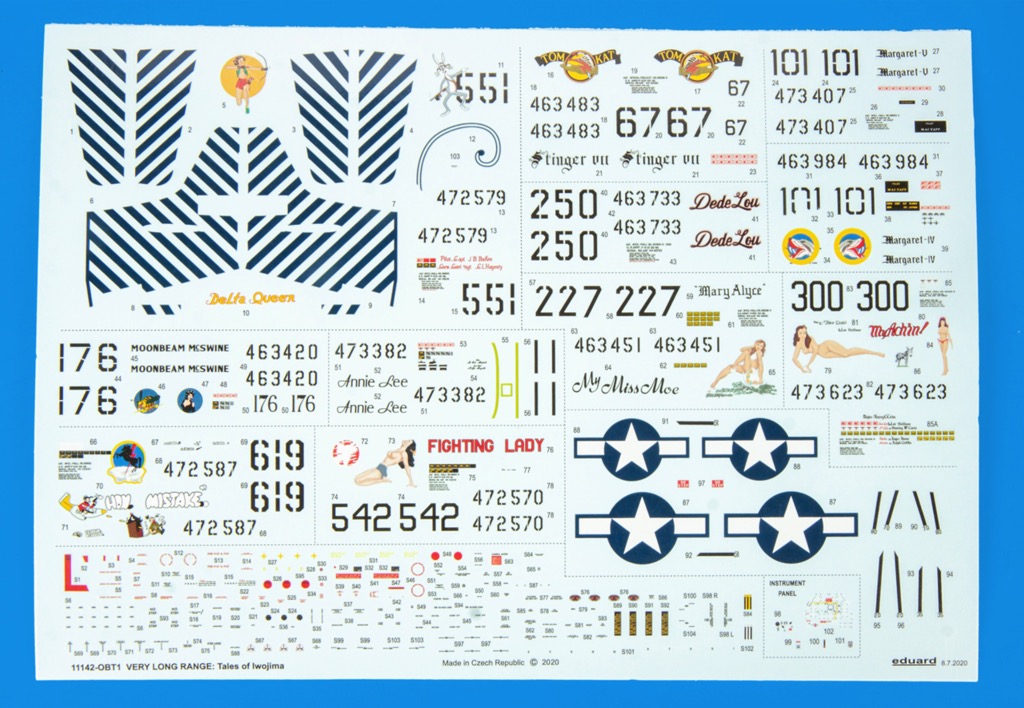 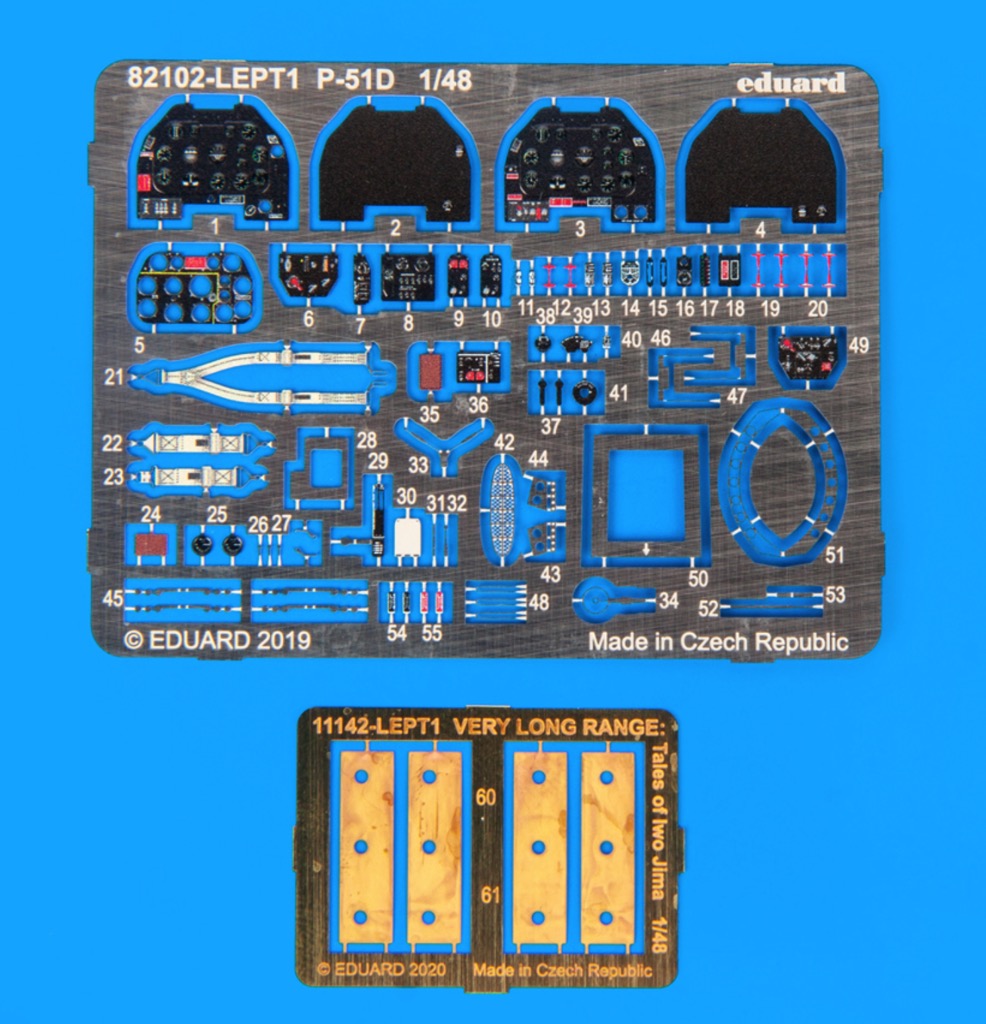 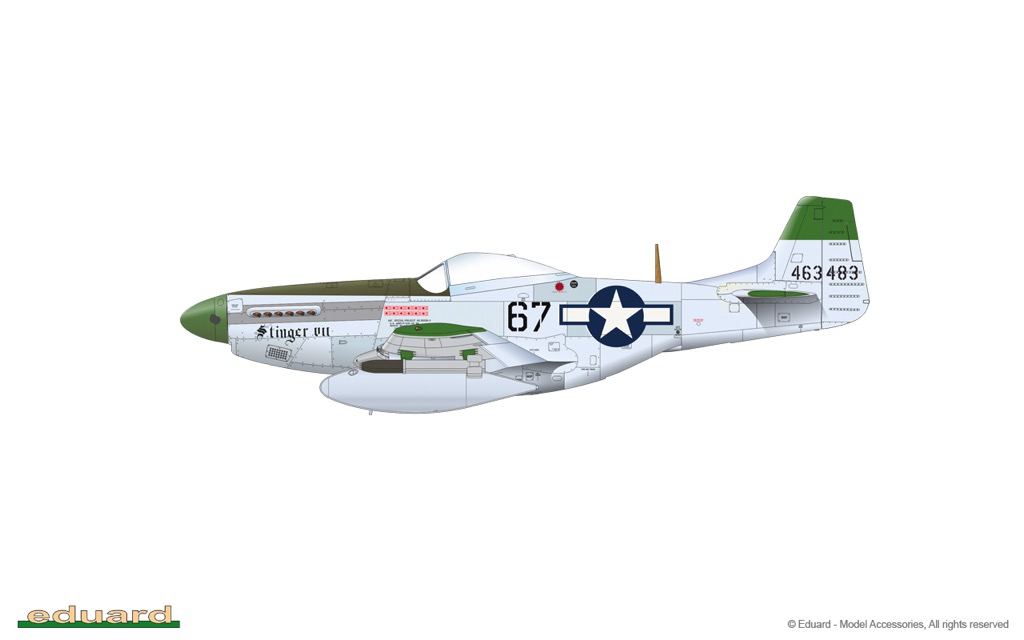 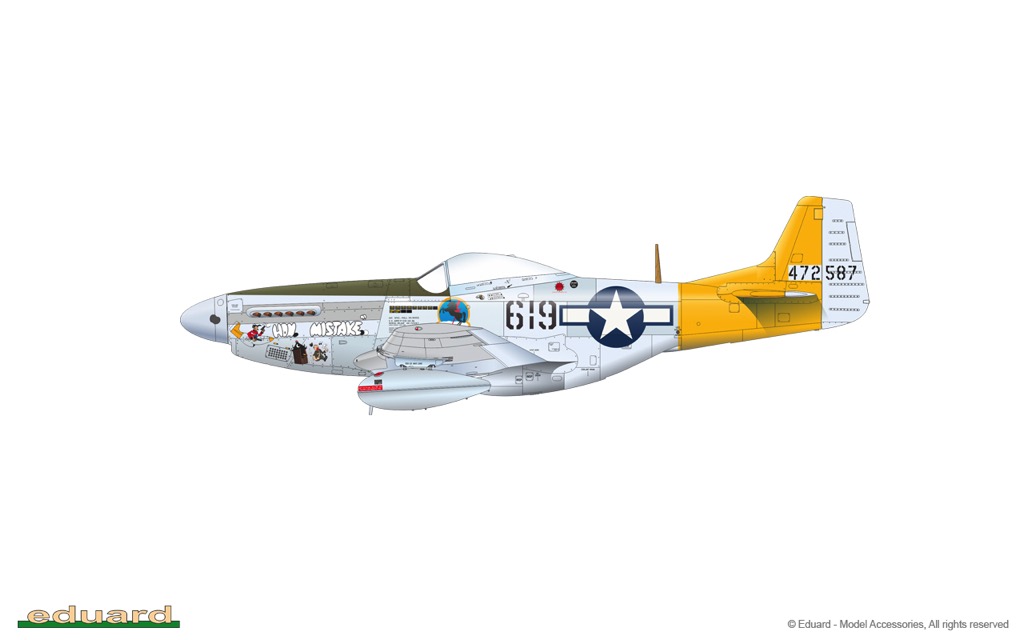 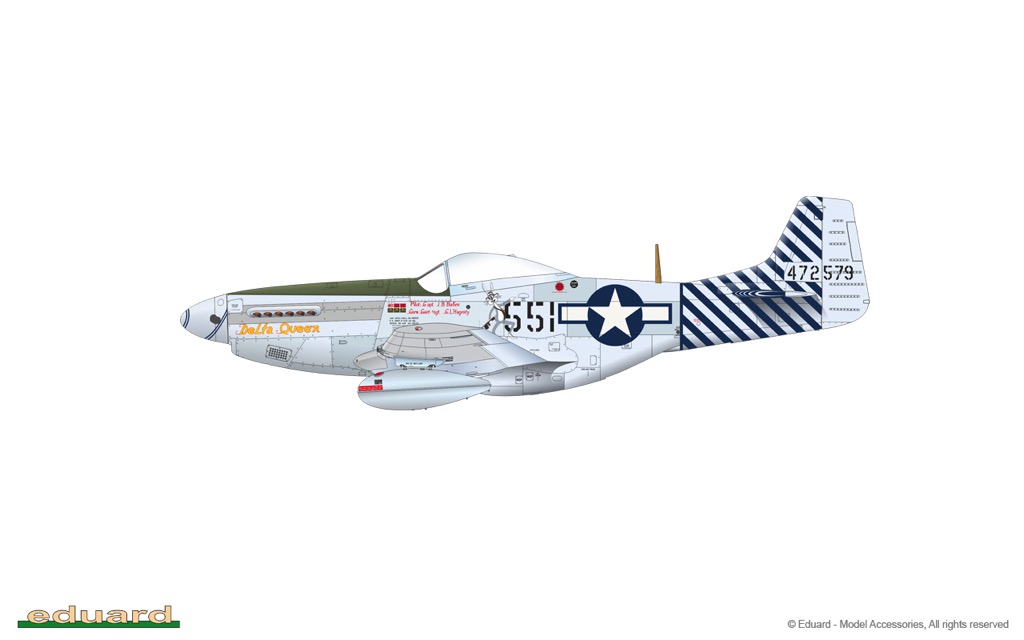 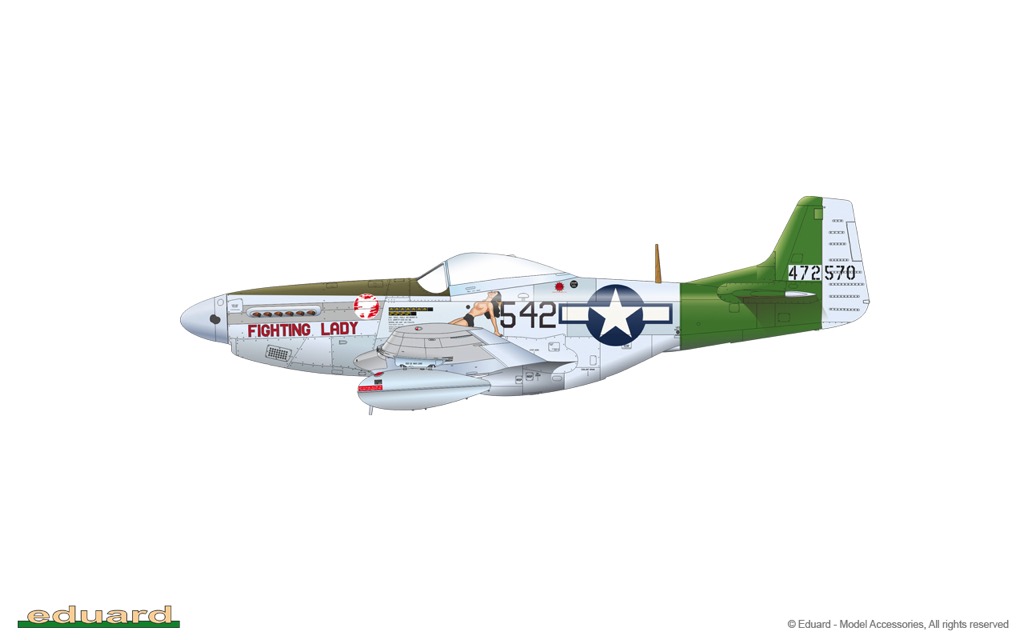 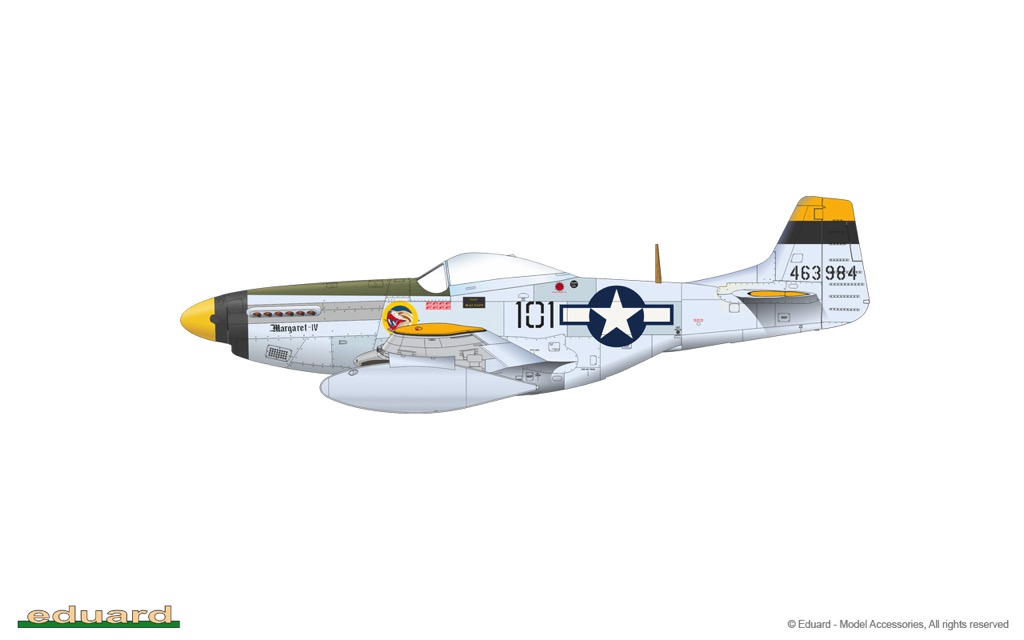 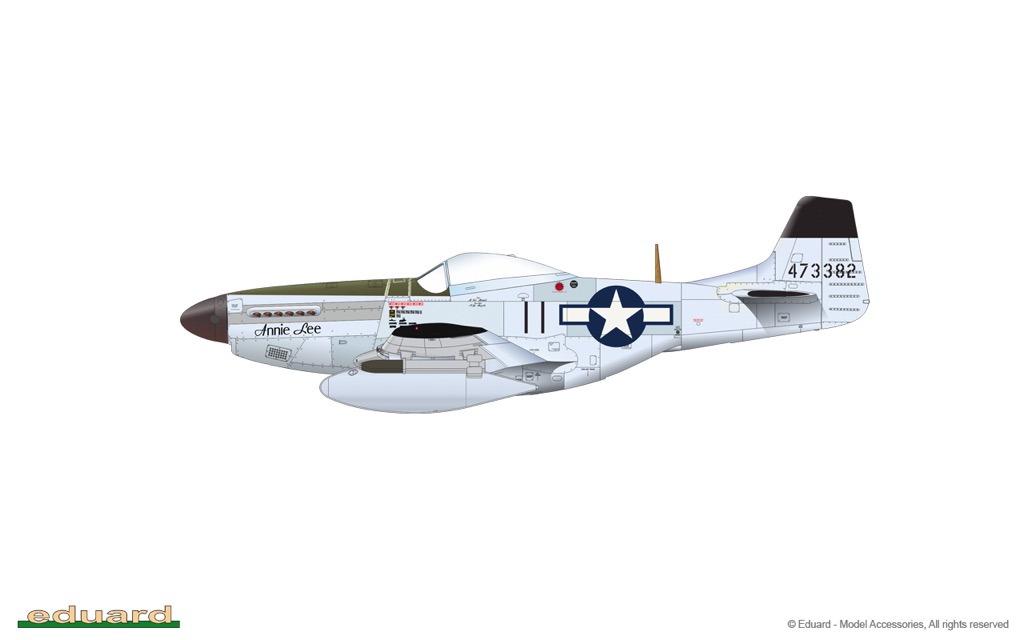 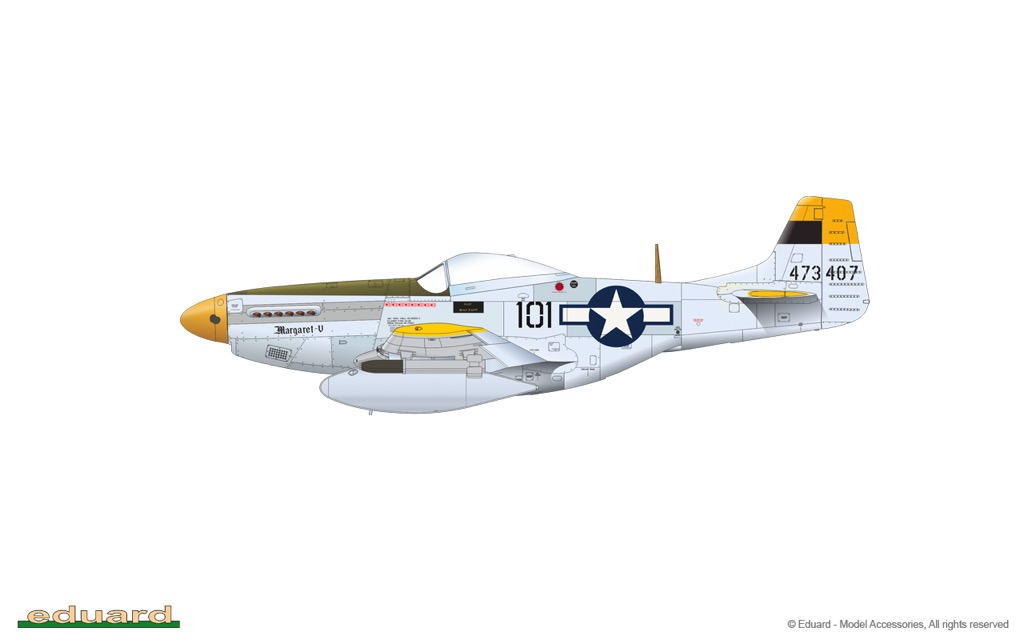 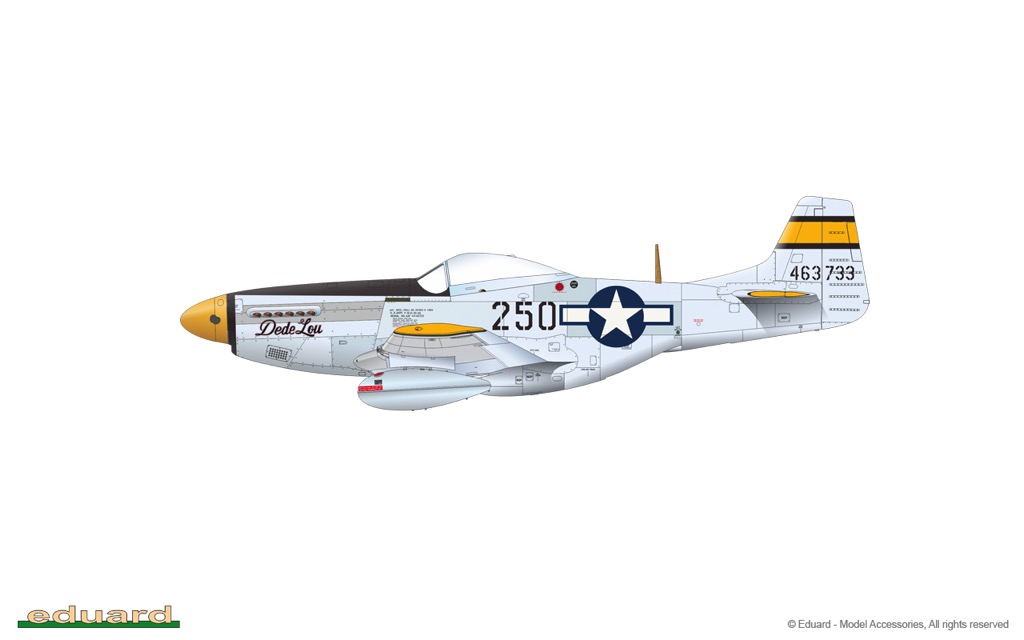 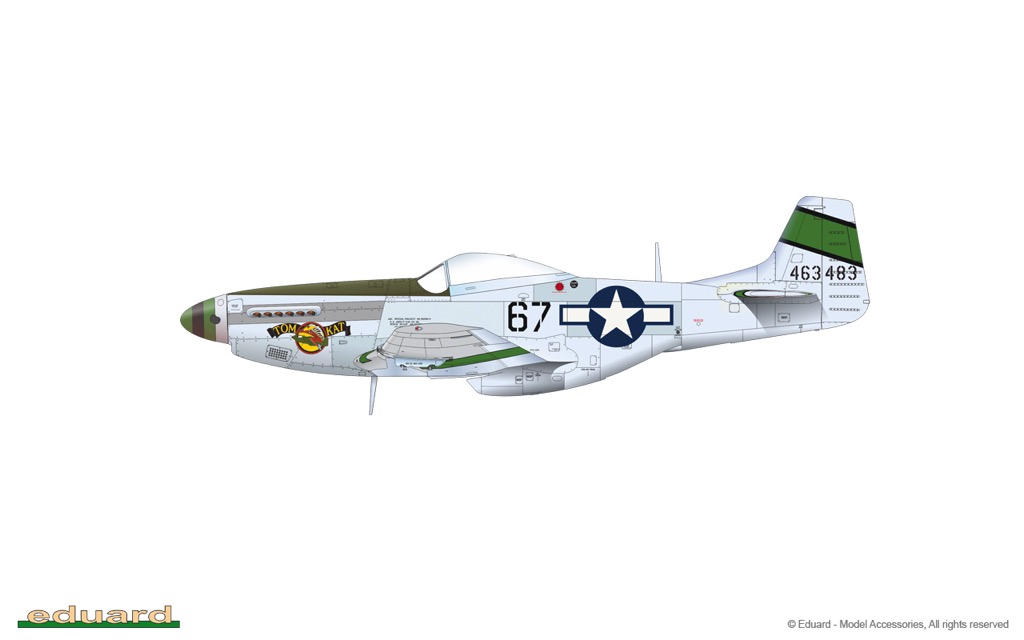 P-51D-20 s/n 44-63483, flown by Maj. Gilmer L. Snipes, CO of 45th FS, 15th FG, 7th AF, Saipan, February 1945
Gilmer L. Snipes got the first kill of the 45th FS on October 23rd, 1943, shooting down H8K Emily flying boat while flying P-40N on Gilbert Islands. He became the unit's CO on April 4th, 1944. 45th FS arrived to Iwojima on March 7th, 1945, providing the ground attack support and also flying the ground attack sorties against Chichijima and Hahajima. Snipes is credited by Ki-44 Tojo from the first VLR Mission on April 7th, 1945. He left unit on April 16th, 1945, returning to the US. Tom-Cat shows the early unit marking with black bordered slanted green stripes on the wing and tail and green/black/green stripped spinner. Note the squadron badge, the Indian rides a P-51, not P-40, as it is often shown. Note the single antenna mast.

P-51D-20, 44-63483, flown by Maj. Robert W. Moore, CO of 45th FS, 15th FG, 7th AF, Iwojima, August 1945
Major Robert W. Moore is the top scoring fighter ace of the VII Fighter Command with 12 confirmed kills. However, his first kill, a Mitsubishi Zero, was achieved already on Gilbert Island on January 26th, 1944, and most of his kills were credited while he has flown with 78th FS. He led the 45th FS since July 19th, 1944, and then he overtook also the Mustang s/n 44-63483, named then Stinger VII. Stinger VII wore the simplified late unit marking with green wing and tail tips and sole green propeller spinner. Note the green painted undercarriage door.

P-51D-20, 44-63420, flown by Capt. Eurich L. Bright, 47th FS, 15th FG, 7th AF, Iwojima, Summer 1945
As part of Hawaiian Air Force were 47th Pursuit Squadron's pilots credited by 7 kills during Japanese ambush of Pearl Harbor on December 7th, 1941. Three and half years later, on March 6th, 1945, 47th FS was the first unit of VII FC arrived to Iwojima. Eurich L. Bright achieved his three kills during the first VRL mission over Japan on April 7th, 1945, shooting down Ki-61, Ki-45 and A6M5 Zero. Later on May 25th, 1945, he shared a Zero together with George Petrouleas. Note the dark parts of the unit marking were most probably very dark blue, not black how is often suggested.

P-51D-20, 44-63984, flown by Maj. James B. Tapp, CO of 78th FS, 15th FG, 7th AF, Iwojima, May 1945
During attacks on Tokyo vicinity airfields on May 25th, 1945, 7th AF Mustang pilots fired unguided HVAR rockets for the first time. A quartet of thusly armed Mustangs was part of a force that included initially some 128 fighters, but only a mere 67 aircraft found their mark. The flight of HVAR armed Mustangs was led by Maj. James Buckley Tapp, who hit a hangar with his rockets at Matsudo Air Base, and then shot down a Ki-44 Tojo in combat. This would be his 7th kill, while his first four came about during the first escort mission of Superfortresses over Japan on April 7th, 1945. Margaret IV shows the early unit marking, with yellow/black spinner, six-inch black band around the nose, yellow/black strips on the horizontal and vertical tails, and black outlined yellow wing tips, with "The Bushmasters" unit badge on both sides of the forward fuselage.

P-51D-25, 44-73407, flown by Maj. James B. Tapp, CO of 78th FS, 15th FG, 7th AF, Iwojima, Summer 1945
Maj. Tapp became the first USAAF ace to gain all his kills during VLR flights, the fifth, a Ki-61, on April 12th, 1945. Unfortunately, he also damaged Mustang of his wingman, Lt. Fred W. Whitte, who bailed out but his parachute didn't open and he died. With a total of eight confirmed kills and two damaged, Maj. Tapp is the second ranked Mustang pilot of the VII FC. The next Tapp's aircraft, Margaret V which replaced Margaret IV, wore the late squadron marking with sole yellow wing and tail tips and yellow propeller spinner. Unit badge is not painted. Curiously part of the black vertical tail band remained painted on the vertical stabilizer.

P-51D-20, 44-63451, flown by Lt. Robert J. Louwers / Lt. John E. Montgomery III, 46th FS, 21th FG, 7th AF, Iwojima, July 1945
As this aircraft was shared by two pilots, it is also double-named, Mary Alice on starboard, My Miss Moe on portside. Mary Alice was Robert Louwers wife's name, the girl was painted upon an Esquire magazine picture. Such painting is quite rare among the 46th FS aircraft, most of them were quite simply marked with black outlined blue vertical tail strip, black outlined wing and horizontal tail tips and blue spinner with black outlined nose of aircraft, which was the same style like with the other 21st FG squadrons where the other squadron colour were white for 531st FS and yellow for 72nd FS. One interesting detail is that Louwers served also as photography officer for 46th FS except he flew nine VLR missions to Japan and one over Chichijima.

P-51D-20, 44-63733, flown by Maj. Paul W. Imig, CO of 72nd FS, 21st FG, 7th AF, Iwojima, March 1945
Major Imig, a veteran of VII FC, named his Mustang for his girlfriend and latter wife. Dede Lou completed all together 26 missions flown by various pilots from Airfield No.2. Paul Imig left the squadron in mid May returning back to US. He spent some three years overseas, having been a P-39 Airacobra pilot of the 333rd Squadron on Canton Island in late 1942. 72nd FS as well as whole 21st FG operated not too much colorful Mustang comparing the aircraft of the other units. The black bordered yellow strips on vertical tail, black bordered yellow wing and horizontal tail tips, yellow spinner, black outlined nose, a name of the plane on the nose side under the exhaust, that's it.

P-51D-25, 44-73623, flown by Maj. Harry C. Crim (later flown by Flt.Off. Theo Gruici), CO of 531st FS, 21st FG, 7th AF, Iwojima, July/August 1945
My Ach'in was delivered from Guam in late May 1945 as a replacement for destroyed aircraft. Flown by Major Harry Crim it was the second Crim's aircraft by 531st FS. 531st FS CO Harry Crim was an old-timer who flew already P-38 over Tunisia in the MTO on 1943, and top scoring squadron and 21st FG fighter ace credited with 6 kills. He claimed his first kills, Ki-45 and Ki-61, on April 7th, 1945, during the historic VLR Mission to Tokyo. Later on August, My Ach'in was flown by Theo Gruici, who replaced the Mission symbols with the another pin-up girl on the starboard side of the aircraft. The number 300 was replaced while the aircraft was moved to Guam to no. 3623 after the end of the war.

P-51D-20, 44-72570, flown by Lt. Ralph S. Gardner / 2nd Lt. Chester Jatczak, 457th FS, 506th FG, 20th AF, Iwojima, June/July 1945
This aircraft was shared by Ralph Gardner and Chet Jatczak, named FIGHTING LADY on port side was later renamed to BROADWAY GAL with inscription on the nose. For Chet Jatczak this was Broadway Gal plane No.2, as he flew the No.538 also named Broadway Gal previously in June and early July. The aircraft No.538 was shot down near Suzuka on July 16th, 1945, while was flown by Capt John Benbow during the strafing of airfields in Nagoya area. He became most probably a victim of Maj. Yohei Hinoki flying a Ki-100. The Broadway Gal printing style is not known. The original squadron color were green stripes on the tail, replaced by solid green paint after the squadron entered the operation for the better visibility.

P-51D-20, 44-72579, flown by Capt. J. B. Baker Jr., 458th FS, 506th FG, 20th AF, Iwojima, July 1945
Captain J.B.Baker Jr shot down a Ki-44 during the escort sortie over Nagoya and Kobe area on June 23rd, 1945, and he is also credited by J2M Raiden probably destroyed during another raid to Tokyo area, strafing the airfields east and northeast of Tokyo. 506th Group struck Katori and strafed Yachimata and Miyakawa. Based on No.3 Airfield, the Mustangs of 458th FS squadron marking consisted of 4inch wide angled dark blue stripes, the replacement aircraft tails were painted in solid blue except vertical rudder. Note the Luftwaffe style spiral on the spinner and an attractive archer emblem on the right side of the aircraft.

P-51D-20, 44-72587, flown by 2nd Lt. William G. Ebersole / 2nd Lt. James R. Bercaw, 462nd FS, 506th FG, 20th AF, Iwojima, July 1945
This Mustang was shared with 2nd Lieutenants Bill Ebersole and James Bercaw. Bill Ebersole, the youngest pilot of the 462nd FS, arrived to Iwojima east side No.3 Airfield already on May 1945, in times of latest night attacks of the rest of Japanese soldiers. He flew his first combat sortie over Chichijima on May 15th, 1945. He flew the first VLR Mission among his total 10 on June 7th, 1945, which was a 8 hours long escort sortie over Osaka. He was credited by Zero destroyed on ground during attack of Hyakurigahara airfield on June 26th, 1945. He is also credited by destroyed small transport ship "Sugar Dog" type on early August. His final strafing mission was flown against Tachikawa on August 5th, 1945, only day before dropping the atomic bomb on Hiroshima.