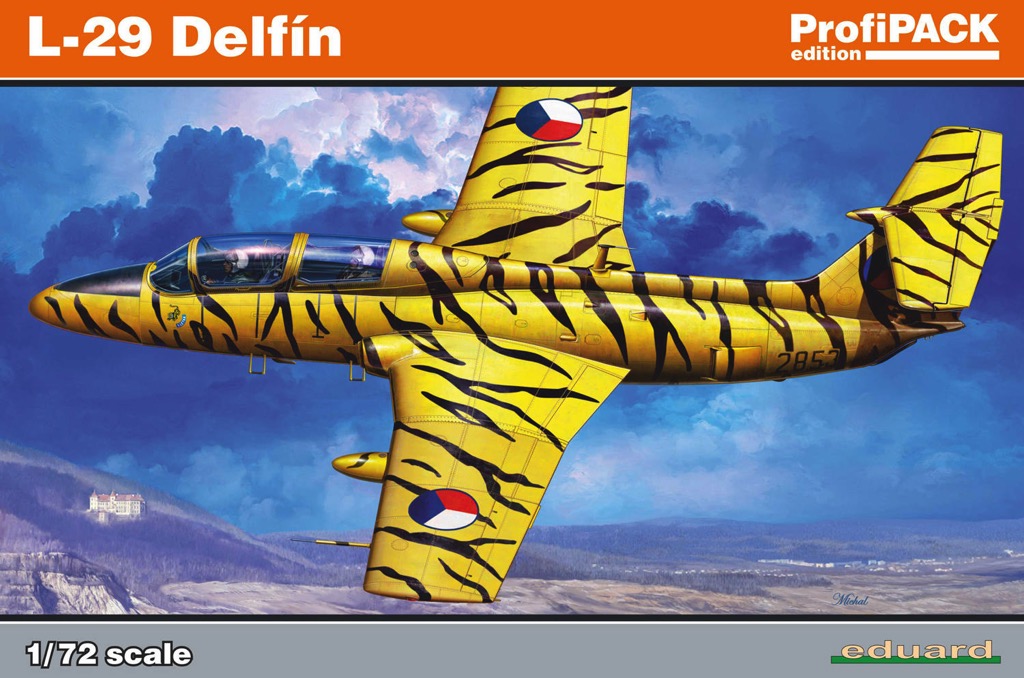 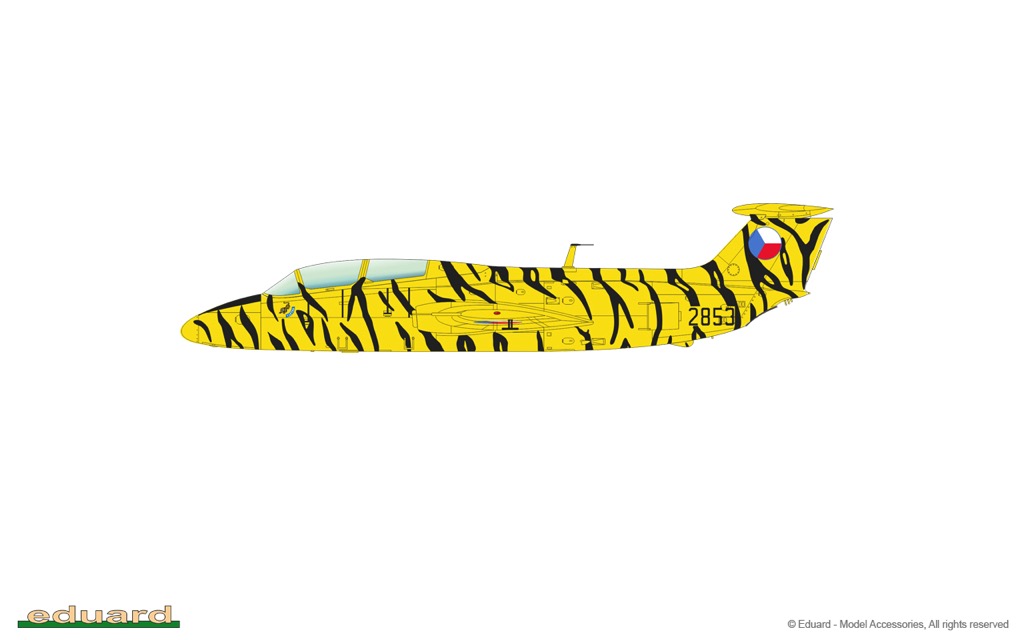 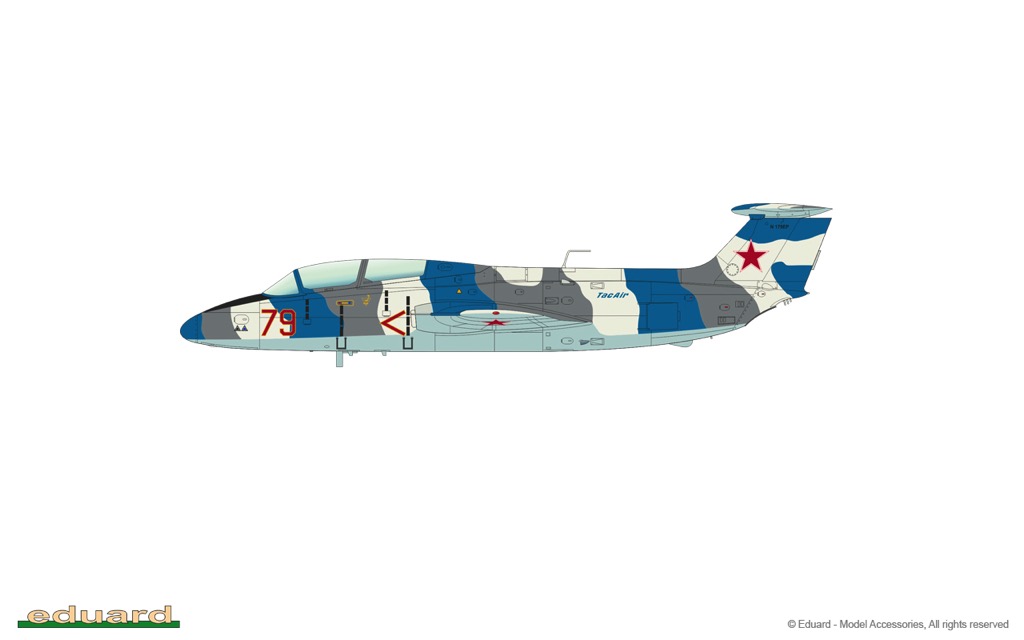 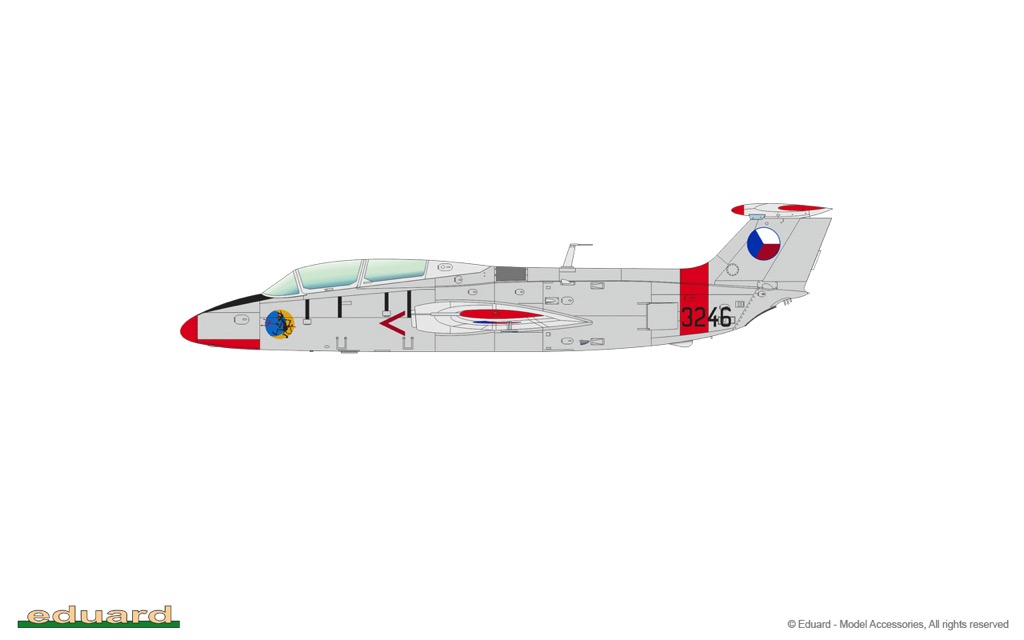 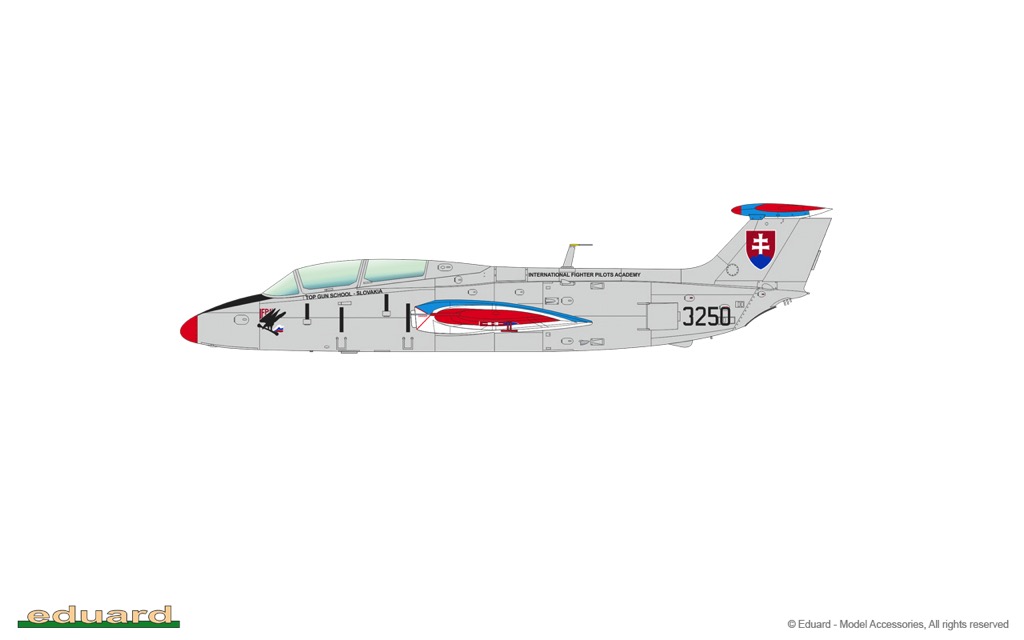 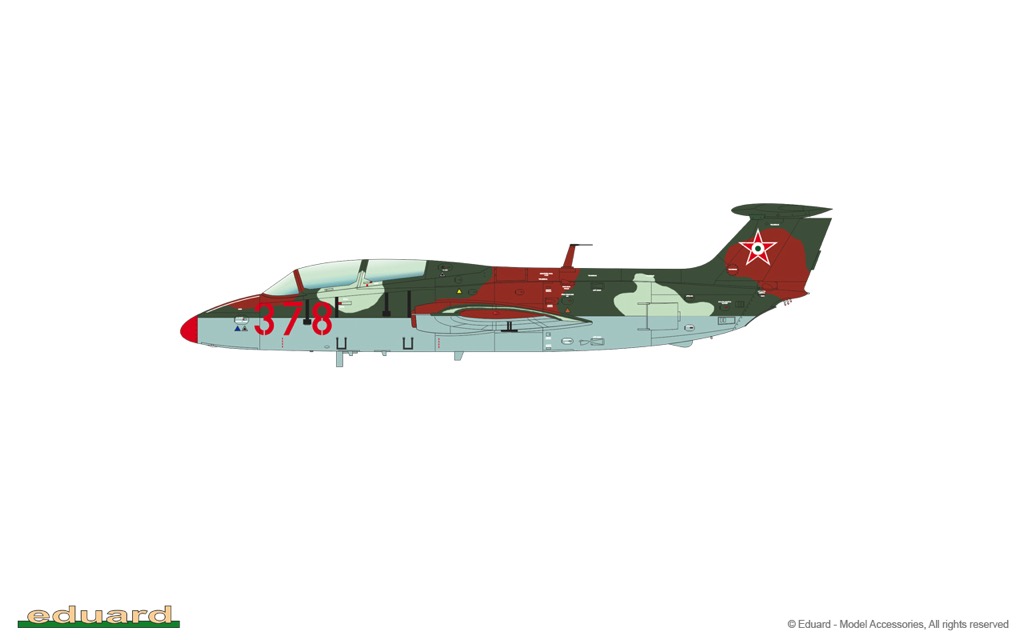 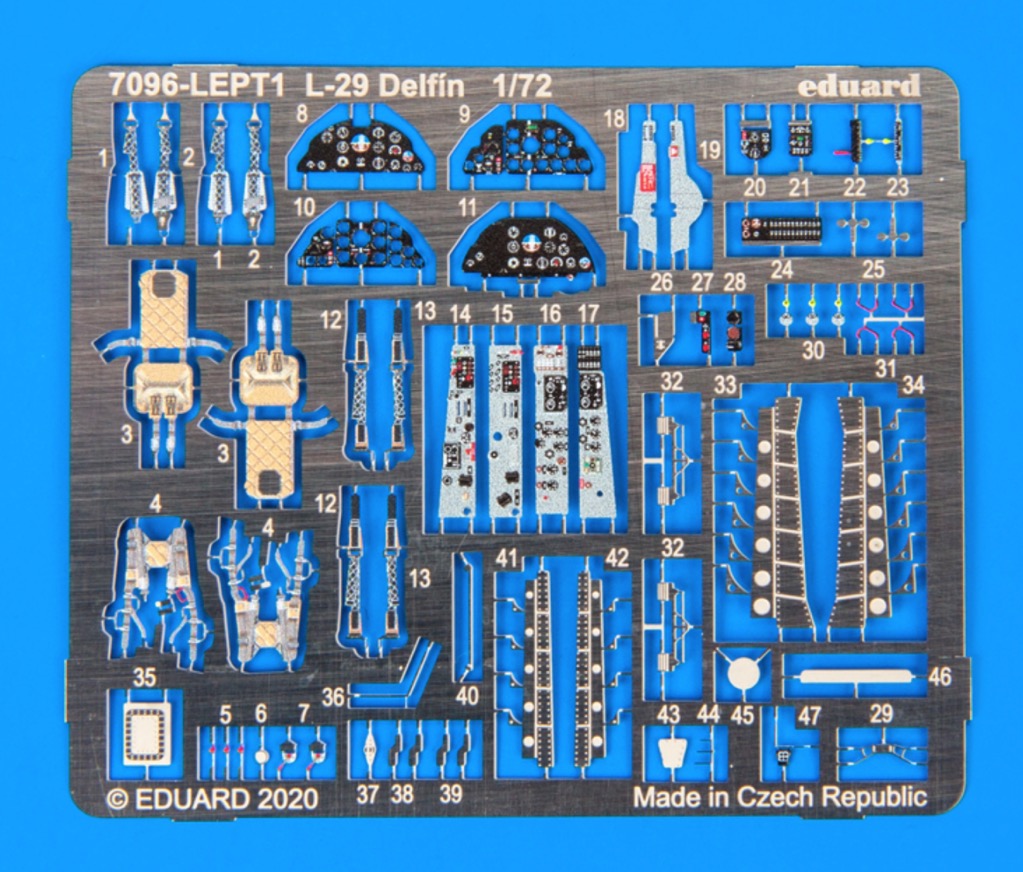 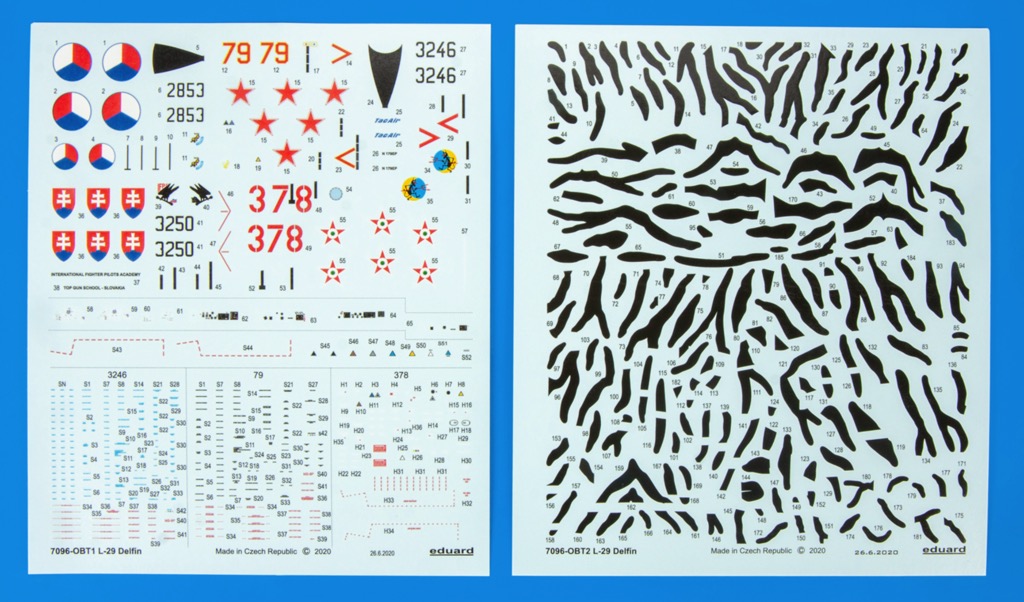 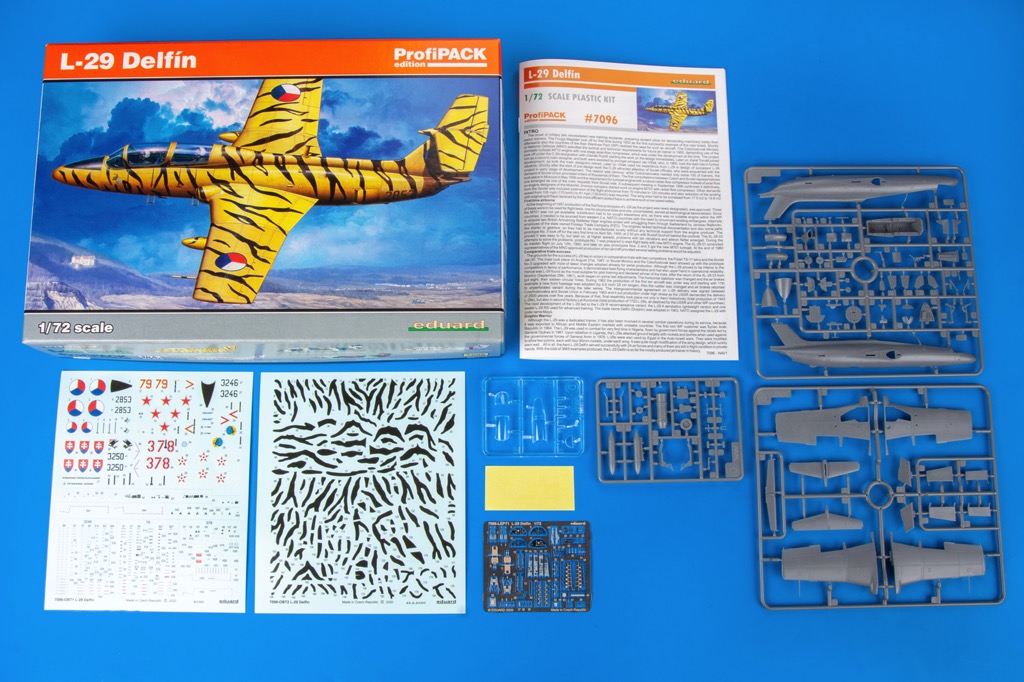 Includes photoetched parts and markings for:

a/c No. 2853, 1st Flight, 11th Fighter Regiment, Zatec, Czech Republic, 1993
This Zatec Delfin received this finish at the beginning of June 1993. Its development was undertaken by the ground crew under the leadership of Capt. Karel Krejci. Its introduction to the public came on July 10th of the same year at an airshow in Zatec. After the disbandment of the 11th Fighter Regiment, the aircraft was transferred to the 1st Training Regiment at Prerov. The entire aircraft, including the drop tanks, was cleaned and degreased and the national insignia and fuselage number were covered by tape. After that, the aircraft was painted yellow, followed by the black tiger stripes.

3250, International Fighter Pilots Academy, Kosice, Slovak Republic, 1993
The International Fighter Pilots Academy was formed at the beginning of 1993 at Kosice as an official training unit allowing civil clients to take part in aerial exercises on military aircraft, including helicopters. One of the aircraft that were used in this role and were also funded for in the budget of the Slovak Air Force, was this L-29. The fuselage of this Delfin was painted grey, while the wings received a striking scheme consisting of red, white and blue segments reminiscent of past aerobatic schemes. The IFPA badge was carried under the windscreen on both sides of the aircraft.

378, 101st Fighter Reconaissance Wing, Szolnok Air Base, Hungary, Summer 1978
L-29 factory number 591378 was built in 1965 and delivered to Hungarian AF to serve its whole carrier at Szolnok Air Force Base with 101st fighter reconnaissance wing. In the first part of its active life aircraft flew in natural metal colours with Red 378 board number. The aircraft returned twice to Czechoslovakia for overhaul in the Trenchen factory, in 1971 and 1978. After the second overhaul it received a new camouflage scheme represented here for summer of 1978. These are Czech colours which were very different from Hungarian AF official colours. Later several new patches of dark green were added by Hungarian technicians for repairs. It is interesting that this aircraft is still in service but this time in private hand in USA as N21KE. After withdrawal from Hungarian AF in March 1983 it was sold in summer of 1984 and had a colourful after-life: flying in VVS colour as 09 with red star. With breakup of Soviet Union it received YL-PAD registration to be shipped eventually to Scotland in mid 1990's and kept in open storage for many years. It was sold again and shipped to the US, after refurbishment flew as Red 09 from Minnetonka and in 2020 is still going strong!

N179EP, Reno AFB, United States of America, 2009
The American firm Tactical Air Services owns two L-29 Delfins, and these are used to train army and navy elements by simulating incoming anti-shipping or air-to-surface rounds. During RIMPAC 2010 (Rim Of The Pacific - the largest international naval exercise) they were photographed on the deck of USS Bon Homme Richard (LHD-6). Aircraft N179EP is camouflaged similarly to the aircraft operated by the Russian Air Force, including Russian stars on the wings and fin.

3246, 3rd Flight, 1st Fighter Regiment, Plana Air Base, Czechoslovakia, 1969-1970
While most L-29s served as trainers with training units, some aircraft were allocated to combat units to aid in maintaining ratings at a minimal expense. One such aircraft was this L-29 coded 3246, which was assigned to Ceske Budejovice's 3rd Flight of the 1st slp (Fighter Regiment) right from its acceptance in 1969 up to the mid eighties. Later, it was transferred to a training regiment in Kosice and flew in Slovakia up to 2003. During 1969-70, the Flight badge was carried, consisting of a devil on a dark blue background, not only by the unit's MiG-21PFMs, but also this L-29. The red trim was part of the standard scheme in which the L-29s were delivered to the main client, the Soviet Union.