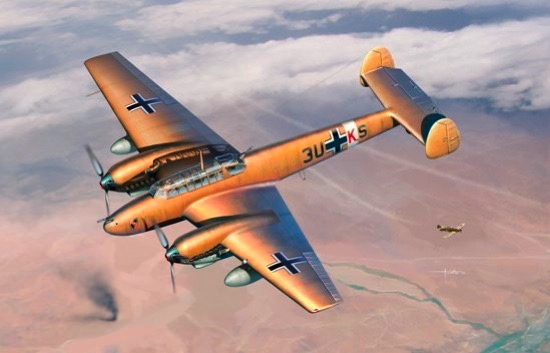 DISCONTINUED This product has been discontinued
and is no longer available.List price: $131.95
You pay: $86.99
(All prices in U.S. Dollars)

Features: The twin-engine Messerschmitt Bf 110 heavy fighter served the Luftwaffe throughout WWII, despite pilots bemoaning its lack of agility in the air. Particularly at the start of the war, it contributed greatly to the advance of ground forces, and later on it found a niche as a successful night fighter. The Bf 110E was a long-distance fighter-bomber that carried four 50kg ETC-50 racks under the wings as well as a centerline bomb rack. It had improved armor and a fuselage upgrade to carry the extra weight. Some 856 examples of the Bf 110E were built from August 1940 to January 1942. The E-2 was powered by DB 601P engines as they became available in sufficient quantity.

Bf 110E-2/Trop is the first time for Cyber Hobby to release a Bf110 model aircraft in 1/32 scale Wing Tech series. As its name suggests, this type was optimized for operations in the hot North African and Mediterranean areas. This new model is a stunner! It features all-new parts for elements such as the revised engine nacelles with deep oil cooler housings and tropical air filters. There's a generous variety of decal marking options too. Combining these new parts with tried-and-tested components existing, modelers are assured of the highest level of detail in their 1/32 scale Bf 110E-2/Trop!