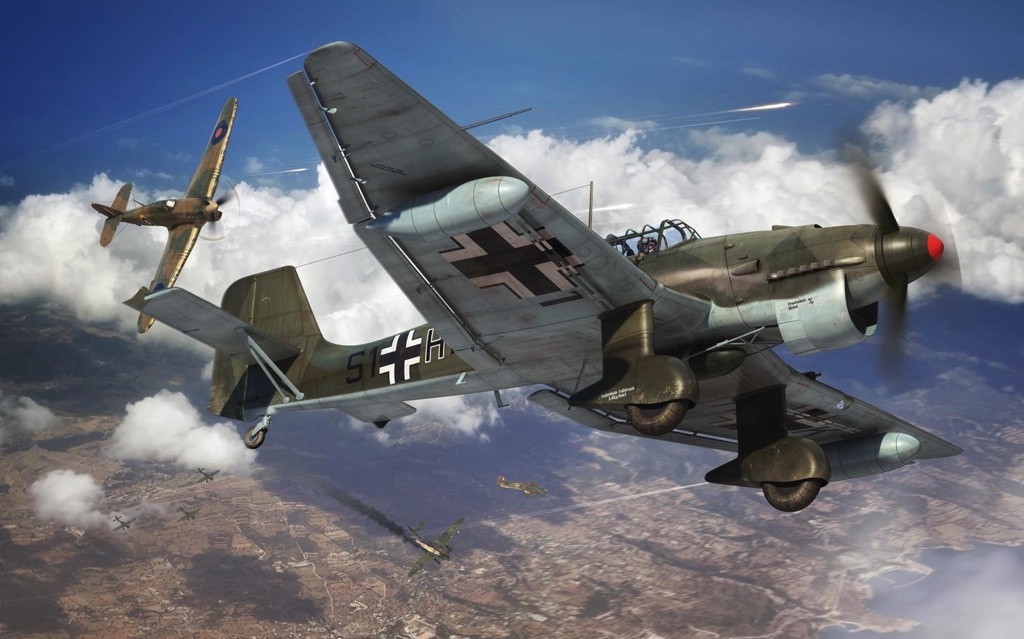 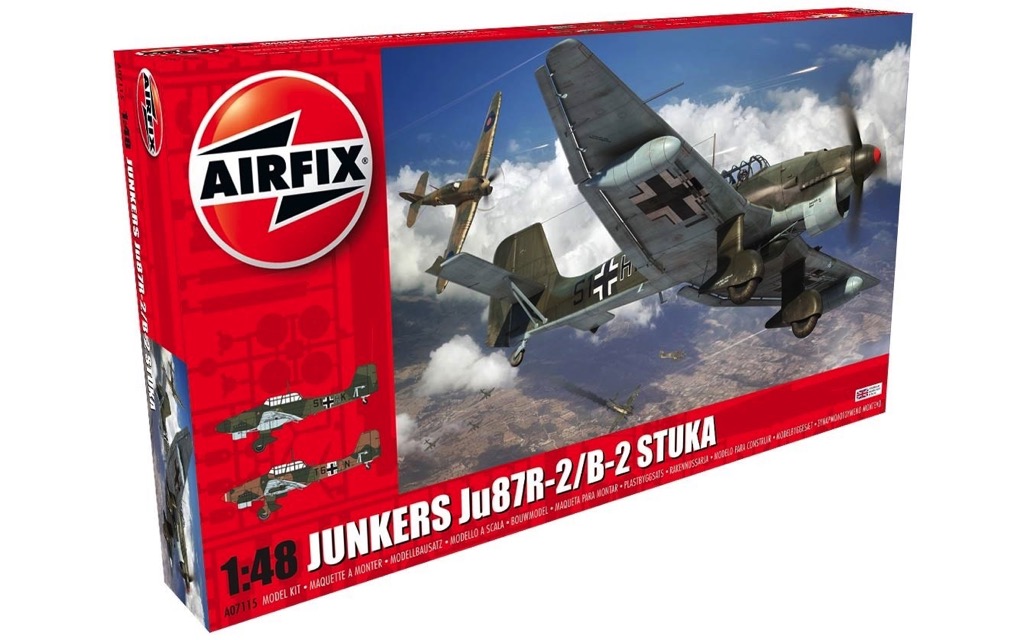 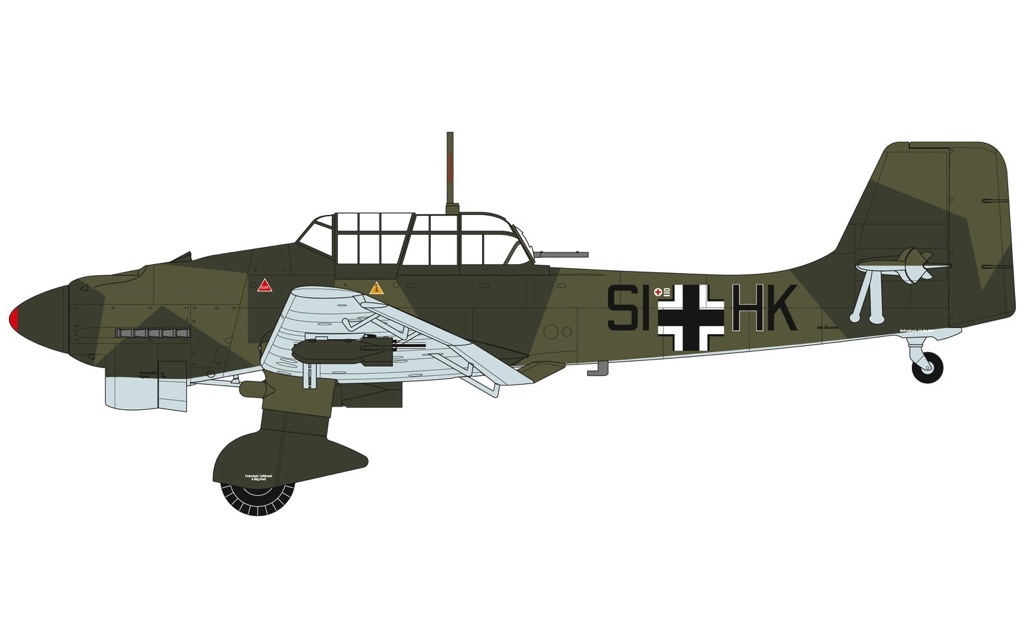 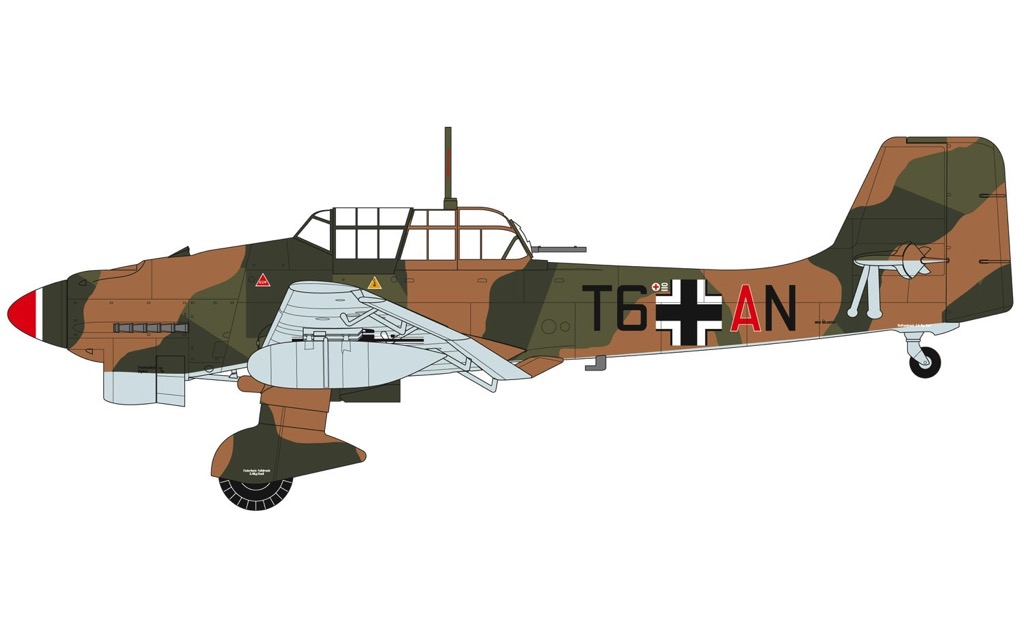 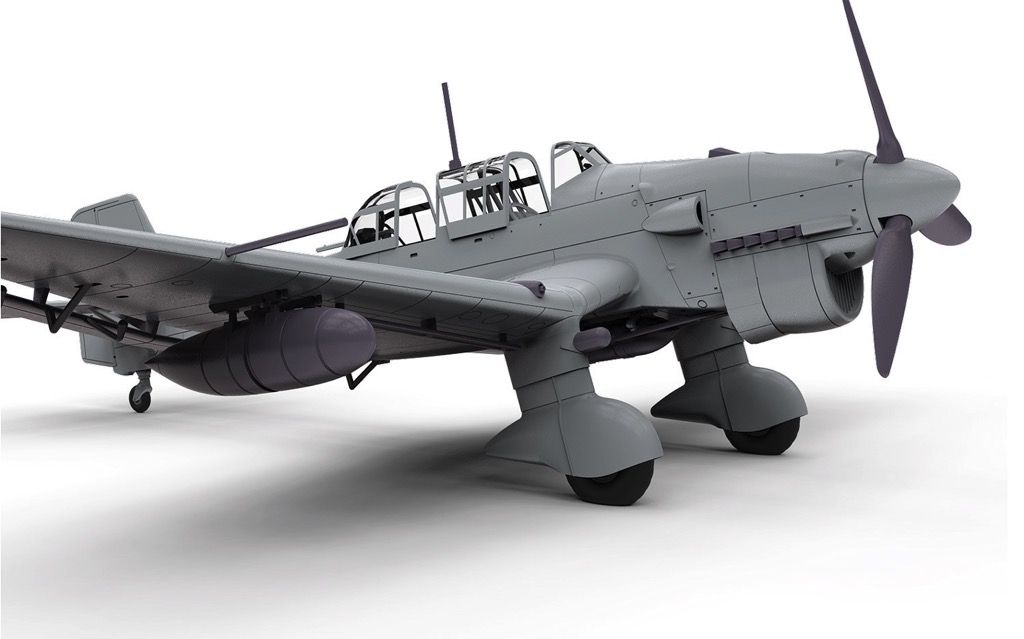 Markings for: Although usually associated with the Wehrmacht's feared 'Lightning War' attacks at the beginning of WWII, the Ju87B Stuka was also a highly effective maritime strike bomber. Capable of performing precision dive bombing attacks against any Allied vessel, the Stuka took a heavy toll of shipping in the English Channel, North Africa and in the Mediterranean. The Stuka also saw service with the air forces of Italy, Romania, Bulgaria and Hungary, as well as remaining in Luftwaffe service throughout WWII.

The attack dive of the Stuka was so severe, that quite a number of automatic features had to be incorporated into the manoeuvre. At an altitude of approximately 15,000 ft., the pilot would locate his target through a bombsight window, which was located in the floor of the cockpit. His engine and propeller had automatic controls, to optimise the aircraft when in a dive, and an automatic trimmer would make the aircraft tail heavy, as the pilot initiated the dive. He would move the dive lever to the rear, which would limit the 'kick' of the control column and quickly begin a defined sequence of actions, which if done correctly, would see his ordnance detonate on his intended target. He quickly set the trim tabs, reduced the throttle and closed the engine coolant flaps. The aircraft would automatically become tail heavy and pitch over in a 180-degree roll, placing the aircraft in a steep nose-down dive - at the same time, dive breaks were automatically deployed, to reduce the speed of the dive, to a constant 360 mph. This was the point of no return - the attack sequence had begun.

As the strain on the body of the pilot increased, he still had much work to do. The angle of his dive could be checked by looking at a series of red lines on the side of his cockpit window and lining them up against the horizon - 60, 75, or 80 degree angle of attack. He would then look forward through the fixed gun sight, to line up his attack, before releasing his heavy main bomb - the optimum release height was indicated to the pilot, by a light flicking on in his altimeter. The bomb was carried on a large U-shaped cradle, which would swing down on release, throwing the bomb safely clear of the large propeller and on to the target. As all this action was taking place, the pilot would have certainly had at least a couple of reassuring glances at the red pins protruding up from the top of the wings, which informed him that the automatic dive recovery system was engaged, should he fall victim to a g-induced black-out. All this would have been taking place in just a matter of a few, frantic seconds!

Once the bombs had left the aircraft, it automatically began its dive recovery sequence. This was the point at which the maximum g loading on the crew would be felt and forces in excess of six times the force of gravity were regularly experienced, which could result in vision impairment at the very least. Once recovered and the nose of the aircraft was above the horizon, the dive breaks were automatically retracted, the throttle was opened and the propeller was set to climb - the pilot then quickly had to manually open the coolant flaps, to prevent the engine from overheating and then resume flying the aircraft. This was the point that the Stuka was at its most vulnerable, flying at low level, at relatively slow speed and in hostile territory. His rear gunner may still be blacked out and indeed the pilot might still be feeling a little light headed, but every anti-aircraft gun, rifle and enemy fighter in the vicinity would be taking pot-shots at them, from every angle.