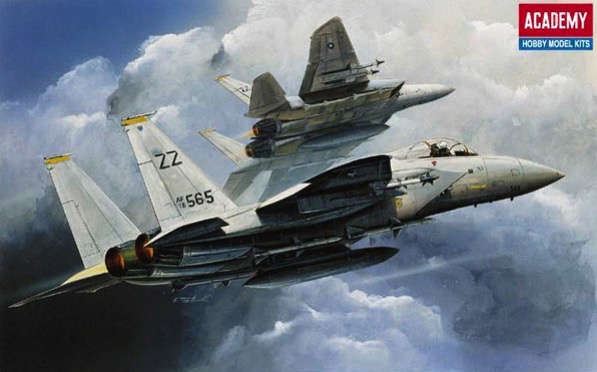 The F-15 Eagle was designed specifically to reprise the role of "dogfighter". To do this, the basic engineering was directed toward lower maintenance time by using less complicated systems. Maintaining the Eagle takes about half the time it takes for a Phantom, yet the F-15 retains essential automatic controls, such as engine inlet positioning.

The Eagle's twin Pratt & Whitney F100 afterburning turbofans prodce 10,000 more pounds of thrust than the weight of the plane. This allows the F-15 to turn tightly without sacrificing precious airspeed. The Eagle carries one 20mm rotary cannon as standard equiment, but eight hardpoints can carry an enormous variety of additional weaponry to enhance the dogfighting abilities of the plane.

The single-seat F-15C is the second generation version of the single seat Eagle and replaced the F-15A in June, 1979. Externally, it shows little change, but inside it contains newer and more versatile electronics making today's Eagle far more deadly.

The two-seat F-15D is the second generation version of the dual seat Eagle and replaced the F-15B in 1979. Externally, it shows little change, but inside it contains newer and more versatile electronics making today's Eagle far more deadly. The two-seat Eagle serves the role of trainer in addition to offering full combat capability.