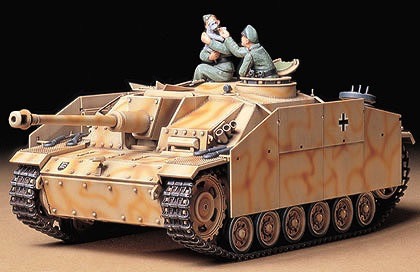 About the German Sturmgeschutz III Ausf.G Early Version
Originally intended for infantry support duties, Germany's Sturmgeschutz (assault gun) and abbreviated "StuG" III first appeared in combat during 1940. It had the durable Panzer III chassis with a completely new superstructure. To keep the vehicles profile as low as possible, the revolving turret was eliminated and the short barreled 75mm L/24 gun was mounted directly onto the hull. As it was mainly intended for close fire support for the Wehrmacht, it was used as self-propelled artillery against the opposing enemy's strategic points. However, when the German forces encountered the Russian KV and T-34 tanks on the Eastern front, the situation abruptly changed. To cope with this Russian tank threat, the Germans were forced to upgrade their existing weapons systems. The G-type StuG III built from late 1942 onwards, used a more powerful, long barrel 75mm L/48 gun. The early G-type had a square shaped gun mantlet. The superstructure was redesigned and an MG42 machine gun with shield, commander's vision cupola and smoke dischargers were added. The thin steel plates, known as Schurzen (skirts) were attached to the sides of the hull beginning in the spring of 1943. The type-42 assault gun mounted a 105mm howitzer on the StugG III chassis and was developed to fulfill the StuG III's original role of infantry support. Incorporating several minor changes, about 7,800 G-type StuG III's were produced.