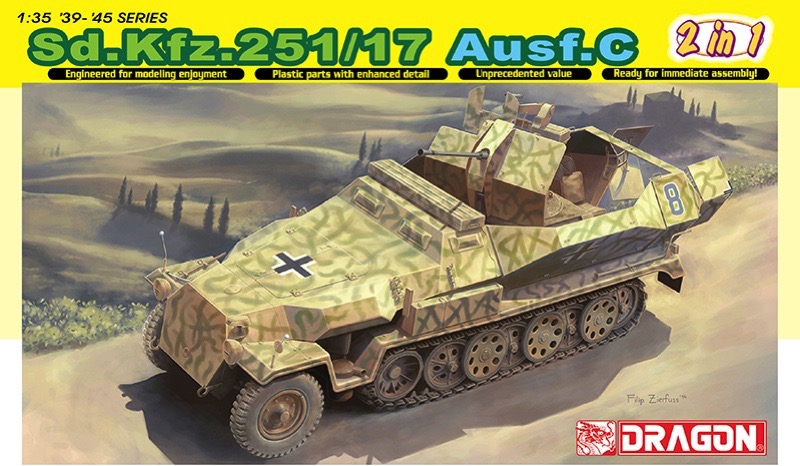 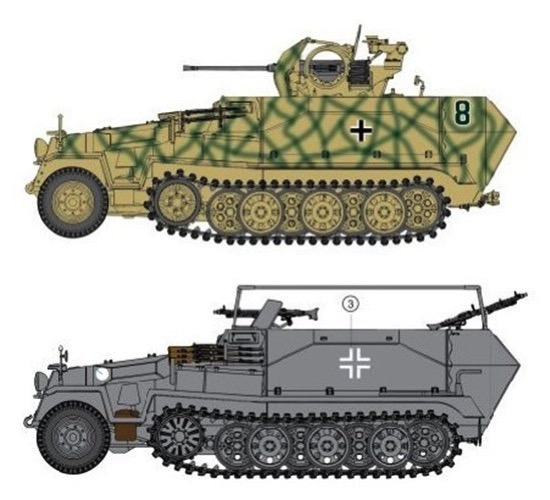 The Sd.Kfz.251 series of halftracks was popular with German troops during WWII, with a whole range of variants eventually being fielded. Similarly, Dragon's 1/35 range of Sd.Kfz.251 halftrack plastic kits are extremely popular with model-makers. The range is already extensive but Dragon is releasing another kit that offers even more versatility. The new 1/35 scale kit is an Sd.Kfz.251/17 Ausf.C halftrack, but the notable feature is that it's a 2-in-1 kit. Modelers can thus build either a Sd.Kfz.251/17 fitted with a 2cm Flak 38 cannon, or an Sd.Kfz.251/17 Command Vehicle. On the former variant, the 20mm gun was mounted to have all-round traverse, though the original conversion necessitated considerable rebuilding of the superstructure. The Command Vehicle, on the other hand, was equipped with Fu5 and Fu7 radio sets as well as a distinctive frame antenna.

Dragon offers the complete fighting compartments unique to these Ausf.C variants, meaning there's no need for modelers to cut and rework the vehicle in order to produce a 251/17. Though the details and configurations are complex, clever engineering by Dragon makes assembly a breeze. The set obviously incorporates Dragon's highly accurate and prized 2cm Flak 38 gun too, which has been released previously. The overall result is a kit that's very accurate, and the 2-in-1 status offers modelers an even wider scope of Sd.Kfz.251 vehicles to build.