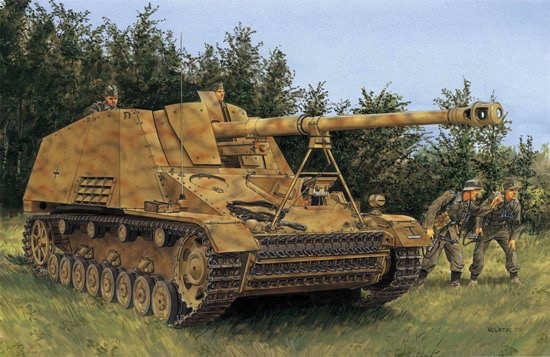 Armed with a mighty horn, thick skin and a remarkable degree of speed and mobility, the rhinoceros is a formidable adversary if you encounter one on the plains of Africa. The same could be said of the Nashorn (the German name for a rhinoceros) from Germany. For Russians and Allied soldiers who encountered this 24-ton "beast" on the plains, fields and towns of Eastern and Western Europe in WWII, it was a fearsome opponent. Armed with a potent 8.8cm PaK 43/1 gun of L/71 caliber, and with mobility provided by a Pz.Kpfw. IV hull and chassis, it could dispatch enemy armored vehicles with relative ease.

Dragon's 2-in-1 and 3-in-1 plastic kits are well known and loved in the modeling fraternity. However, these don't compare with the next step - a Nashorn 4-in-1 kit. Indeed, modelers are now able to build either an Initial, Initial Modified, Early or Command version of this tank destroyer. The necessary parts to build any one of these variants are included in the box, giving unparalleled options. The detailed parts include Dragon's Razor Edge treatment of the armored plates for the fighting compartment superstructure and for the gun shield. The ends of these plates feature a true-to-scale thickness. The 8.8cm PaK 43/1 gun is highly detailed and it can even recoil just like the real thing. Dragon's well-acclaimed 1/35 scale Nashorn has now given birth to four fully grown Rhinos.