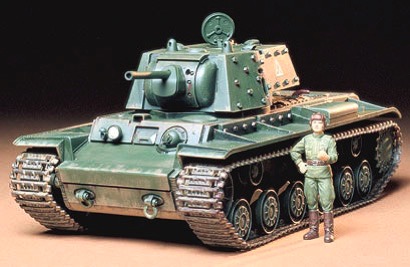 Available(Ships in 2-4 business days)
This product is in stock
at our suppliers, if ordered it
will take a few days to arrive.List price: $35.00
You pay less than: $28.00
Add to cart to see actual sales price.

In order to counter the increasing threat of the German anti-tank forces, the Russian Army created the KV-1B, an improved version of their KV-1 heavy tank, in 1940. It featured additional armor plates bolted on to the turret and hull, resulting in increased armor thickness of 120mm on the turret front as well as 110mm on the turret sides and hull front. It featured more formidable protection, but at the same time this reinforcement increased the tank's weight and therefore reduced its mobility. The bolt-on armor was later changed to a welded application for greater effectiveness. . The Tamiya 1/35 scale model is a faithful replica model kit that was originally introduced in 1988.