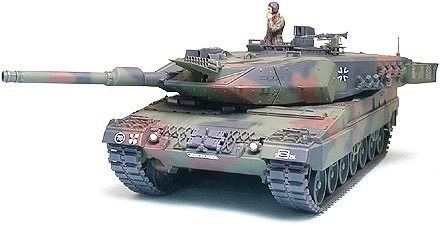 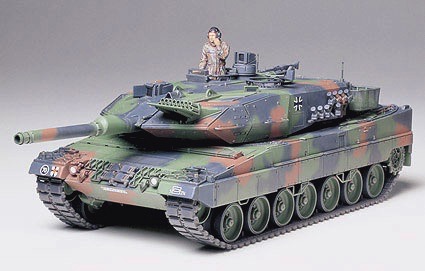 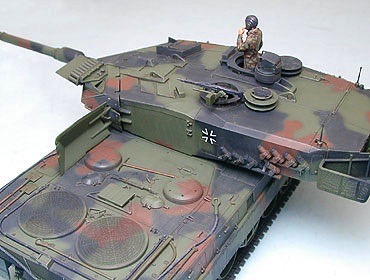 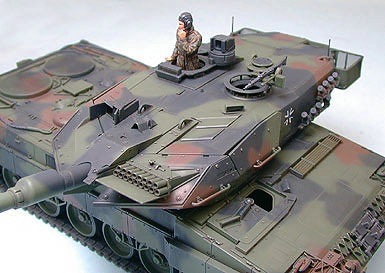 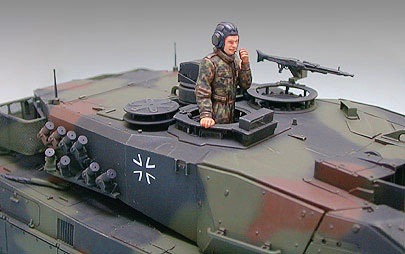 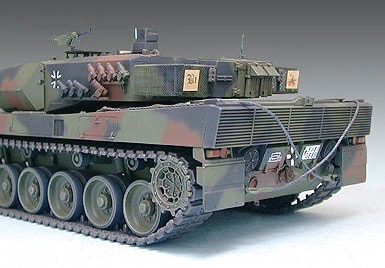 About the Leopard 2 A5
The Leopard 2 is the main battle tank of the German Army and has the most powerful performance among modern tanks. The A5 is its latest version which will surely last well into the 21st century. It features add-on wedge-shaped armor on the front and sides of the turret, electric main gun stabilizer, etc. With these, defense and commander's firing control systems have been significantly improved on the A5 version, which started to be deployed to the German Army at the end of 1995.


Some History...
After WWII German industry returned to once again show its superb tank developing ability, bringing out its first post-war battle tank, the remarkable Leopard 1. The Leopard 1 MBT was the first tank of a family of armoured vehicles such as: Self-Propelled-Anti-Aircraft-Gun "Gepard", Armoured Recovery Vehicle, Armoured Engineer Vehicle and Bridge Laying Vehicle.

After combat effectiveness improvement programs the Leopard 1 A5 is still the backbone of 11 armies land forces on three continents. Development of the Leopard 2 started in 1970. Due to the threat of the cold war times of the early 70's a program for a new main battle tank was started together with the United States and named tank 70 program and wholly improve the Leopard 1. Compound armor was generously added and the turret was redesigned with much angularity. It was mounted with a Rhienmetall 120mm L/44 smoothbore main gun, and powered by a 1500 PS outputting MTU MB873Ka-501 engine.

In 1979 the first Leopard 2 was delivered to the German Army as the beginning of a series production of more than 2000 tans. During the production for Germany, the Netherlands and Switzerland decided to equip their armies with the leopard 2. In the meantime, Sweden, Spain, Austria and Denmark have acquired the Leopard 2 as their main battle tank. Later, the 2A1 type Leopard 2 was equipped with an integrated thermal imager to the commander's sighting equipment; the 2A3 type featured an updated radio system; the 2A4 type featured a newly designed fire suppression system and a new shape to its armored skirting.

In the late 1980's, the Leopard 2 underwent further improvements in efforts to make it the world's finest battle tank into the future. In 1991, with the easing of the tension between East and West Germany and their subsequent reunification, an improvement program was initiated and divided into two stages: KWS I and KWS II. KWS I was intended to mount the tank with a L/55 120mm smoothbore gun; KWS II was suggested upgrade the protection, the fire control system and the ease of operation. After the deliverations between Germany, the Netherlands, and Switzerland, the KWS II proposal was adopted.

In December of 1993, the upgrade of 225 tanks of the 2A4 type was decided. The improved version was officially designated the 2A5 type. Krauss-Maffei and MaK oversaw improvements to the chassis of the 2A5, while Wegmann & Co. and Rheinmetall took care of the turret. The major changes to the chassis included a sliding driver's hatch and a rear view CCD camera mounted at the rear of the chassis, enabling movement in reverse at high speeds. The front and sides of the turret were fitted with easily replaceable, wedge-shaped add-on armour. To minimize damage from shrapnel inside the turret a spall liner was also instabilized. The hydraulic gun control and stabilization systems were replaced by electrical ones, and the new commander's panoramic periscope PERI-R17A2/TIM incorporates an independent thermal significant enhancing the night fighting capability of the tank.

The delivery of the first Leopard 2 A5 (KWS II) started in autumn of 1995 and the first leopard 2 A5 for the German Army were officially handed over in November 1995. In December of that year the Leopard 2 A5 were deployed to Armour School and the Tank Battalions 33, 214 and 393. Improvements to the leopard 2 A5's possessed by Sweden and the Netherlands also continued. Germany steadily developed the improved firepower, 120mm L/55 smoothbore gun equipped Leopard 2 A6. As the first Leopard 2 family vehicle, the Armoured Recovery Vehicle "Buffalo" which is already in use in Germany and the Netherlands, has been developed. The continuous evolution of the Leopard 2 assures that it will keep on setting new standards as the world best MBT until well into the future.

NATO colors
During the mid-80's, NATO specified three standard colors to be used on all of its vehicles: green, brown, and black. Since the Leopard 2 A5 is also finished in this three-tone camouflage, Tamiya went to work on creating three high quality Acrylic Paints for the 1/35 scale Main Battle Tank. These paints will surely come in handy for all your NATO modeling endeavors.