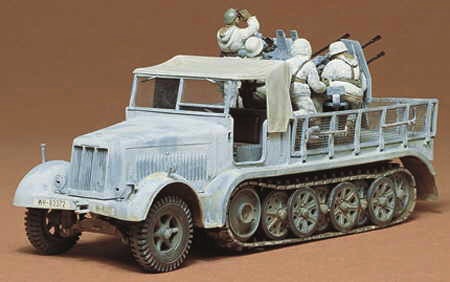 Recognising the excellent tractive force and cross-country ability of half tracks, the German Army Ordnance Bureau decided in 1932 to develop six military half tracks, from a 1-ton to a large 18-ton tractor. Different car makers were ordered to develop one of these.

Krauss-Maffeir in Munich took charge of an 8-ton half tracks. Because this firm had given attention and study to half tracks since 1928, they completed a prototype, named KMm7 as early as 1933. It soon developed into the KMm8 and KMm9, and in 1936 the KMm10 was put into production. It was not until the KMm10 was born that the 8-ton half track was officially designated "Medium 8-ton Tractor (Sd.Kfz-7). The last production model, KMm11 was completed in 1938 and put into production immediately.