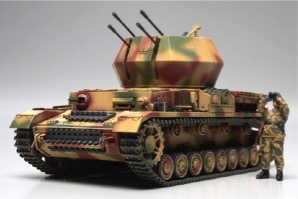 One of the main attractions of Tamiya's 1/48 Military Miniature Series is how easily the kits can be integrated into dioramas, especially ones that involve aircraft of the same scale. With the addition of the Flakpanzer IV Wirbelwind, Tamiya gives modelers yet another interesting subject for such projects.

About the Flakpanzer IV Wirbelwind.
As the Luftwaffe lost air superiority, Allied fighter-bombers proved to be an increasingly dangerous threat to the German army, and plans were developed to produce a purpose-built mobile antiaircraft platform to protect the ground units from air attack. The Wirbelwind was based on the proven Pz.kpfw.IV chassis and featured a uniquely-shaped open turret with 9 side panels. Armed with quadruple 20mm Flak 38 L/112.5 fast-firing cannons, it was able to make life difficult for low-flying Allied planes that got in its range as well as provide direct fire support for ground troops. Due to material shortages, production was hampered and there were never enough of these vehicles to go around.