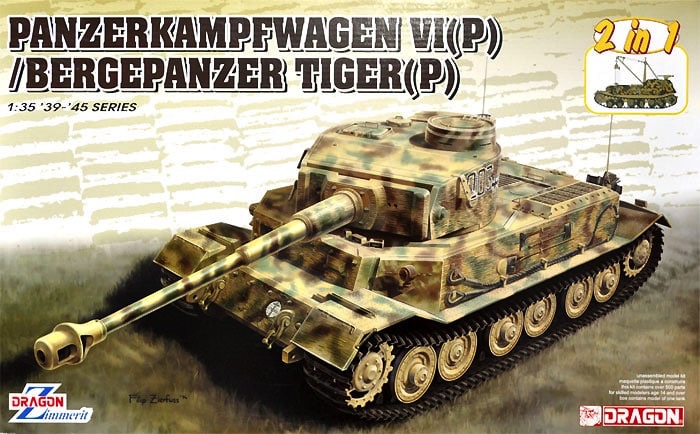 Continuing Dragon's wave of 2-in-1 kits is this convenient 1/35 scale set that allows modelers to build either a Tiger (P) coated or a Bergepanzer Tiger (P). Only five Tiger (P) vehicles were produced in 1942. They were issued for training and testing purposes and only one saw combat as a command tank on the Eastern Front in September 1942. Three hulls were also converted into Bergepanzer recovery vehicles in September 1943. These featured a raised superstructure at the rear and the only recovery equipment installed was a small derrick crane, rams and timber beams.

Modelers can decide which version of the Tiger (P) they wish to build - either the Tiger (P) tank with Zimmerit already molded on, or the Bergepanzer Tiger (P) without any Zimmerit on the hull. That means the kit contains two complete hulls and chassis. Different photo-etched parts for each vehicle type are included in the box too. Either vehicle assembles with ease, and the Bergepanzer Tiger (P) in particular has been out of stock for some time, leaving modelers with some hard choices ahead!