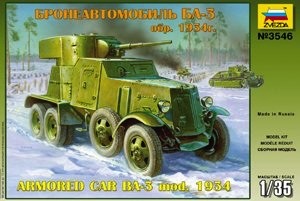 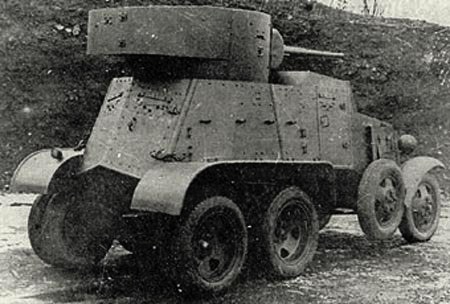 DISCONTINUED This product has been discontinued
and is no longer available.List price: $27.99
You pay: $19.29
(All prices in U.S. Dollars)

(Broneavtomobil 3) was an armored car developed in the Soviet Union in the early 1930s. The 45mm gun turret was the same as that used on the T-26 and BT-5 light tanks. It was built on the GAZ-AAA chassis. This 6 X 4 chassis was a modification of the US Ford AA 4 X 2 truck. This chassis limited mobility to roads or very hard ground. Mobility could be improved slightly by fitting tracks to the rear pair of dual wheels, making this car a convertible half-track.

The BA-3 is very similar to the later BA-6; the BA-3 has a door in the right rear of the hull that is not present on the BA-6. Both cars were superceded by the later BA-10. All cars of this series were very heavily armed for the era; they could knock out other recon vehicles with ease. However, their thin armor made them vulnerable to heavy machinegun fire and small caliber cannon fire.

The BA-3 was used in combat against the Japanese at Khalkin-Gol, in the Spanish Civil War and in the early stages of fighting on the Eastern Front against the Germans. Ironically the German Army used a few Spanish-built six-wheeled armored cars that were close copies of the BA-3/6 series. The heavy scout vehicle role was taken over by light tanks such as the T-60 and T-70 later in the war.