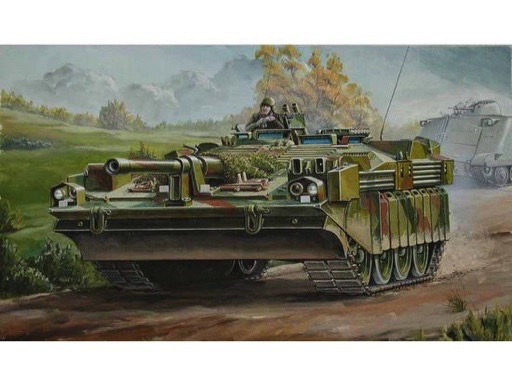 The S-tank was developed in the later 1950s by Bofors for the Swedish Army and a total of 300 were delivered to the Swedish Army between 1966 and 1971. Labelled by some as a tank-killer rather than a main battle tank, the "S" tank is noted for its unusual design, being perhaps the first "turretless " tank in the world. Since it's entry into service with the Swedish Army the S-tank has many improvements including the replacement of the Rolls-Royce K60 engine by the Detroit Diesel, as well as modified transmission, a laser range-finder and additional fuel tanks. The main armament is a 105mm rifled tank gun fed by an automatic loader mounted at the rear of the hull. The height of the gun is controlled by the driver by raising or lowering the suspension rather than having a separate turret which would allow for ration and elevation/lowering of the main gun, the suspension was designed to allow the entire front of the tank to be elevated or lowered.