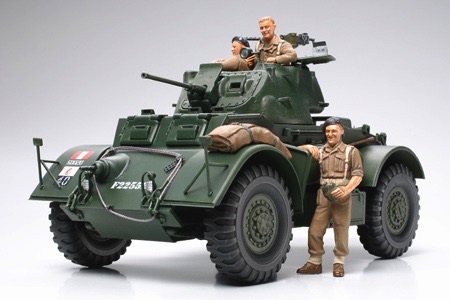 About the British Staghound Mk.I
The Ford Motor Company originally designed the T17E1 4X4 armored car to meet a U.S. Army requirement. Powered by two Cheverolet 270 engines, the vehicle was armed with a 37mm cannon turret and 3 machine guns - one in the hull, one coaxial with the main gun, and one on the turret for anti-aircraft defense. The arrival of the lighter M8 Greyhound meant that the U.S. Army was no longer interested in the T17E1, but other Allies such as Britain and the Commonwealth forces found the vehicle useful and named it the Staghound. They entered service in Italy in 1943and served until the end of the war. After WWII, they still saw action in areas like the Middle Eastand Central America with various armies.