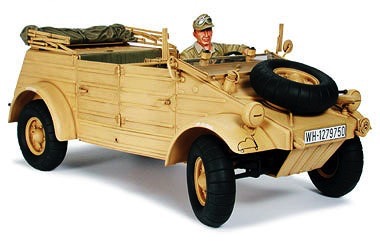 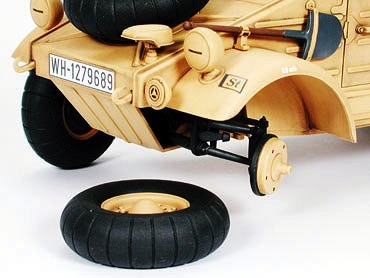 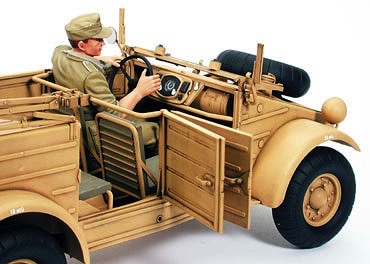 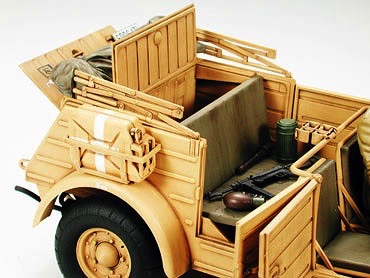 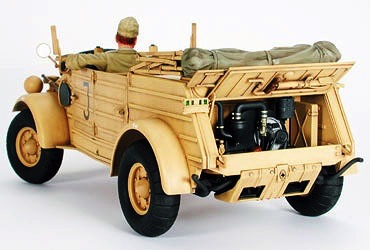 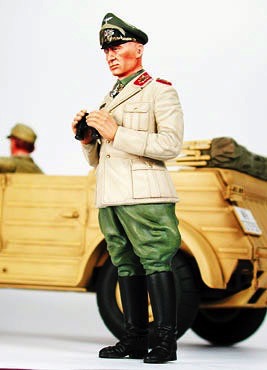 Kubelwagen Type 82-Africa Version
It was September of 1940 and Germany's Italian ally was unsuccessfully attempting to invade British-occupied Egypt. To support Italy in their struggle against the British, Germany deployed the German Africa Corps, which was comprised of the 5th Leichte (Panzer) Division and the 15th Panzer Corps, to Tripoli. The man chosen to lead this fighting force was Lieutenant General Erwin Rommel, who had already earned a glorious reputation for commanding the 7th Panzer Division, a.k.a. the "Phantom Division" during the Battle of France. This nickname stems from the fact that no one knew its true whereabouts, including the German High Command and even Rommel's own staff! From February of 1941 to May of 1943, despite serious shortages of supplies and weaponry, the Africa Corps lead by Rommel fought an ardous desert war, at one point managing to chase the Allies as far back as E! Alamein, North Africa. The military vehicle that earned Rommel's trust on the searing African desert was the Kubelwagen Type 82.

Development of the Kubelwagen
Soon after his rise to power in 1933, Adolf Hitler made an opening speech at the Berlin Auto Show. There, he declared the construction of the Volkswagen or "people's car", a priority for the German Automobile Industry, later promising a car in every garage across the country. The design of the "people's car" was entrusted to the brilliant Professor Ferdinand Porsche. The construction of the car focused on simplicity and cost savings. At this time, the going price of a Ford or Opel passenger car was between 2000 to 3000 Reichsmarks, the projected price limit of the Volkswagen was set at under 1000 Reichsmarks. The first prototypes were completed in 1936 and production was scheduled for the following year. However, the "people's car" never made it to the hands of the people. With the annexation of Austria in1938, and the takeover of Czechoslovakia in 1939, so began the militaristic expansionism of Germany. Interests of mobilization led the Army Ordnance Office to present Porsche with the Wehrmacht specifications for a military version of the Volkswagen in January 1938. Porsche completed the prototype in November and designated it the Kubelwagen Type 62. Unfortunately, the cross-country capability of the Type 62 proved lacking. Professor Porsche subsequently increased the vehicle's ground clearance by 50mm and modified the gear ratio. This improved version was designated the Type 82 and entered mass production at the Volkswagen factory in Wolfsburg in 1940. By the end of the same year, the 1000th car was completed; by early 1943, the 20,000th car rolled out of the factory.

Construction and Performance
The Kubelwagen Type 82 featured a simple, utilitarian design. Its trustworthy powerplant consisted of a 4-cylinder, horizontally opposed, air-cooled engine, capable of 23.5hp at 3000rpm. Its displacement was 985cc and provided a top speed of 80km/h. In March of 1943, the power of the engine was increased to 25.5hp. The engine was reliable and easy to maintain, which proved to be a boon in both the broiling North African theater and frigid Eastern European Front. The chassis consisted of a semi-tubular backbone, to which the front and rear axles attach. Above that, a pressed steel floor, ribbed for rigidity, formed the base of the base of the cab. All wheels were independently sprung and torsion rods were used instead of the common leaf springs. The body was also simple and lightweight, consisting of thin iron stampings. Although most Kubelwagens were equipped with only rear and wheel drive, because they weighed a mere 700kg, they displayed excellent cross-country capability, and could be lifted out of trouble by only two or three soldiers.|

Kubelwagen-Africa Version
Because of its reliability and ease of repair, and since its engine did not require a coolant, the Kubelwagen proved particularly effective in North Africa. At the request of various divisions in North Africa for a vehicle suitable for the desert, a Continental balloon tire equipped version went into production from 1942. Two types of balloon tires, a grooved and an ungrooved version were used. Because the tires were wider than normal tires, a spacer to raise the height of a spare tire attachment was added to the hood of the car. Some of the balloon tire equipped Type 82 were even used in Italy after the fighting in North Africa stopped in May of 1943.