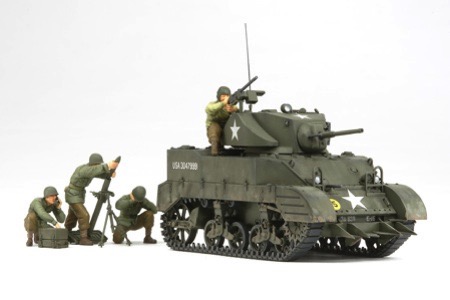 Backordered (Sign up for an email
notification when it's
back in stock!)List price: $34.00
You pay less than: $27.20
Add to cart to see actual sales price.

The M5A1 light tank which was developed from the M3 Stuart light tank was put into production from January 1943. It was powered by twin four-stroke V8 300hp Cadillac gasoline engines which enabled a top speed of 58km/h. It came armed with a 37mm main gun and two 7.92mm machine guns and featured additional armor plating on the turret's right side to protect the anti-aircraft machine gun. Approximately 6,800 units were produced and were mainly used in reconnaissance roles at the Italian and North West European Fronts.