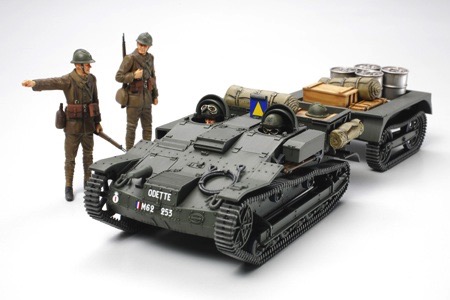 Always looking for interesting subjects to add to our world-famous 1/35 scale Military Miniatures lineup, we now proudly announce the release of the unique French Armored Carrier UE. Display it with the B1 bis (ITEM 35282) to create an exhibit of early WWII French AFVs.

About the Armored Carrier UE
Originally developed in the early 1930s, this light armored carrier was capable of towing light artillery and was also designed for use in supplying infantry units at the front lines. Its compact design meant that the heads of the two crew members protruded from the chassis, so distinctive semi-spherical hatches were created to give them a little protection. The initial production of 60 vehicles was soon supplemented by larger orders as France sought to re-equip its army to face the growing threat of Germany. By 1940, approximately 4,800 had been built, including an improved version featuring 4-step gearbox and towing shackles. It was used in the early days of WWII by the French army until its surrender, after which the German army used captured vehicles until the end of the war, modifying some of them into self-propelled guns.