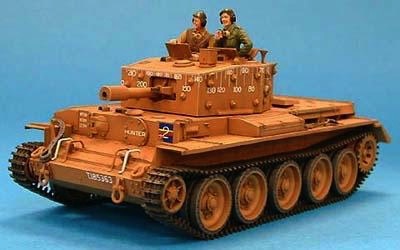 About the Centaur C.S. Mk. IV
Britain's main cruiser tank in the latter half of WWII was the Cromwell. Due to a production shortage of Meteor engines, the Liberty Engine was used instead and the vehicle was renamed the Centaur Cruiser Tank. Among the various types of Centaurs, the 95mm tank howitzer equipped Mk.IV close support tank was the only version to enter actual combat. In the Normandy Invasion of June, 1944, the Centaurs were deployed to the Royal Marines Armoured Support Group, where they fired at German pill-boxes from landing vessels. After the landing, the Centaurs continued to offer fire support for infantry and served a key role in securing the beachhead.