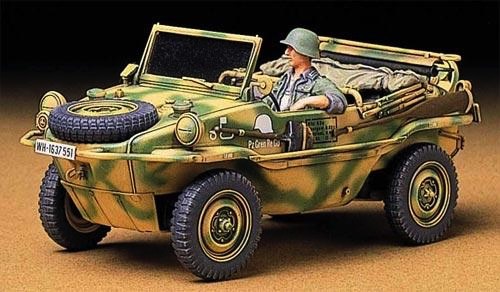 Backordered (Sign up for an email
notification when it's
back in stock!)List price: $20.50
You pay less than: $16.40
Add to cart to see actual sales price.

About the German Schwimmwagen Type 166
The Volkswagen Beetle, which has been called a German national car, was conceived and designed in 1938 by Dr. Ferdinand Porsche, the originator of the famous sports car manufacturer, "Porsche". The Beetle's excellent features were matchless durability and inexpensiveness. Then, the German Army decided to develop a military vehicle based on this small, tough and inexpensive car. As a result, several kinds of military vehicles were manufactured for trial. The amphibious Schwimmwagen type 128 was one of them.. After further refinements, the vehicle was officially designated the "Schwimmwagen type 166" and mass production began in 1942. Its high-set exhaust pipe at the rear looked quite humorous but of course it was so set in anticipation of the vehicle's use on the water. The rear mounted, air-cooled 4 cylinder engine had a displacement of 1,130cc and output of 25 horse power, propelling the car up to 80km/h on land, while on the water, to 10km/h. When running on the water, the vehicle used a screw at the rear. It was raised above the rear engine deck, once it was back on dry land. The steering on the water was done just like when it was on land by change of directions of front wheels, which served as a rudder. In total 14,276 type 166's were produced by the end of 1944, and those were actively employed to fulfil reconnaissance, liaison and various other duties during World War II.