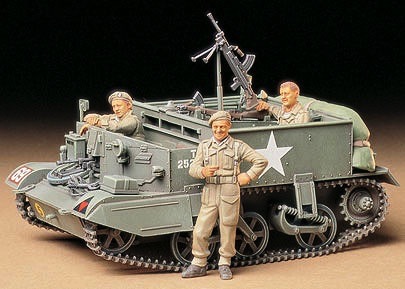 Backordered (Sign up for an email
notification when it's
back in stock!)List price: $22.50
You pay less than: $18.00
Add to cart to see actual sales price.

About the British Universal Carrier Mk.II
During World War II, Great Britain and its commonwealth Armies used a vast number of small sized, fully tracked weapons carriers, while the American and German forces relied mainly on half-tracks and wheeled transport. Development of these fully tracked carriers dates back to 1925 when Major (later Lieutenant-General Sir Gifford) Martel constructed a one-man "tankette" to interest the British War Purchasing Office. Since then, variations consisted of machine gun carrier, mortar carrier, light gun tractor etc. These weapons were built by several firms, and although built for specific purposes, they did serve in the early days of the conflict. Experiences at the front however, showed a need for a multi-purpose vehicle, capable of a wide range of tasks. Thus the Universal Carrier Mk. I, and the improved Mk. II came into being about 1940. The Universal Carrier had an open top crew compartment on each side of the engine compartment, and a lightly armored superstructure. The Ford V-8 cylinder engine put out 85 brake horsepower and provided a 48km/h of top speed. Armament and stowage were varied according to its mission, but most typically, it carried a Czech designed .303 inch Bren light machine gun (modified and manufactured by Enfield), plus some other small arms. With its high mobility and adaptability, the Universal Carrier proved satisfactory throughout the conflict, from the African desert to the European campaign.