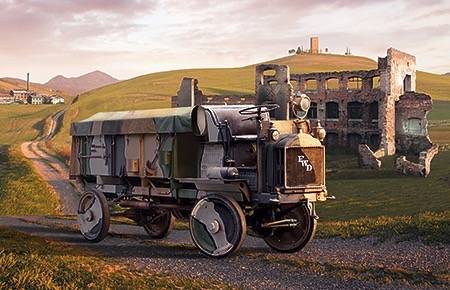 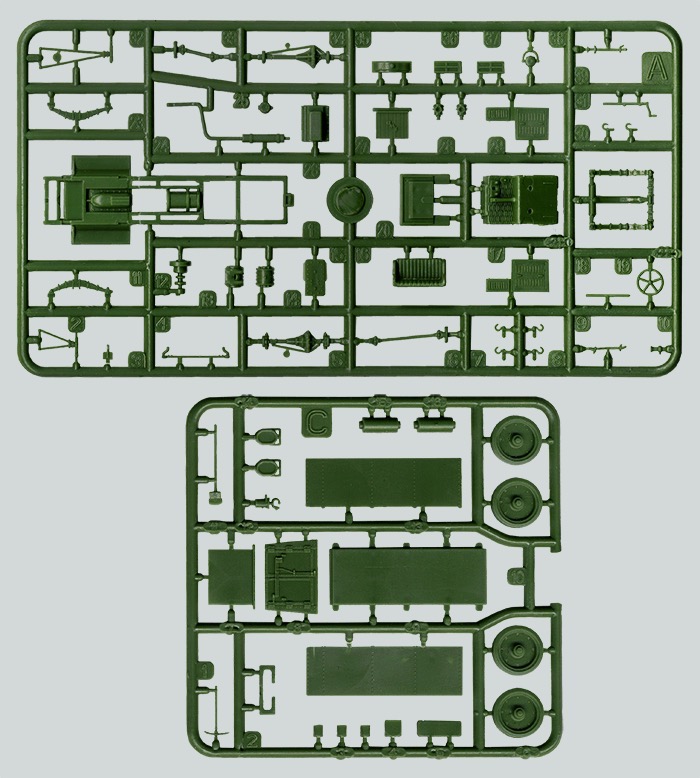 Markings for: In 1912, the US military ordered a new truck for the needs of the army. According to their requirements, it had to have a loading capacity of three tons and also be able to haul artillery guns.

The Four Wheel Drive Auto Company were already developing the Model B truck which could be quickly adapted to accord with military requirements.

Of course, the machine's design was generally quite primitive from today's point of view, however at that time the great majority of vehicles had similar or even more primitive designs. The Model B moved the engine and the driver's seat directly over the frame, a distinct difference from other models of truck which had the classic 'bonnet' design. Later such a configuration of truck would be classic in turn, however at the time of its creation the Model B was truly innovative. With an identical length of frame, the Model B had a larger body size than bonnet trucks and could also take more freight. The body had arches for raising a tarpaulin awning, wheels with spokes and rubber rims.

In 1916 the Four Wheel Drive Auto Company received an advance order, but only for 38 machines. From the beginning of World War I the demand for trucks was very considerable. Even before the entry of the USA into the war, the British military ordered 500 vehicles of this type, and already by the middle of 1917 production of completed vehicles was being measured in the thousands. In total 17,555 Model B's were built, of which 14,473 were delivered to the American army, 3,000 into the service of the British army, and 82 trucks to Imperial Russia.

The use of the trucks wasn't limited to transportation of goods. In the British army the Model B was used primarily as a tractor of heavy guns. In Russia all 82 cars were taken on by the First Separate tractor heavy division 'M', transporting British Vickers guns.

The US Army Weapon (Ordnance Department) also became interested in the vehicle to fulfill its requirement of the transportation of field artillery ammunition. The FDW company modified the design - the machine now had a strengthened steel body and on its boards was placed an entrenching tool. Many trucks of this kind came to the front in Europe, while large numbers were also in service in the USA.

Despite its archaic design, some machines were still working up until the beginning of World War II. The primitive car was durable and reliable, and with the advent of more modern vehicles was nevertheless equal to the various military tasks.