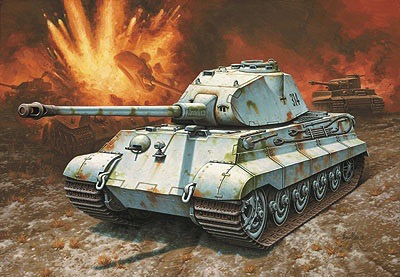 The Tiger II, unofficially known as the King Tiger, developed in 1943, was produced by Henschel from 1944 onwards. The King Tiger combined the requirements for armoured protection and fire power in an exemplary manner. The front armour up to 150 mm thick could not be penetrated by any of the on-board weapons of its opponents. The side armour was up to 80 mm thick. Despite several massive allied bombardments of the Henschel works in Kassel, a total of 492 Tiger IIs - including the prototypes and 50 vehicles equipped with the Porsche turret - were delivered to the troops. However not all of these reached the units at the front. A large number of Tiger IIs were lost when they broke down as a result of their heavy overall weight or simply because they ran out of fuel.