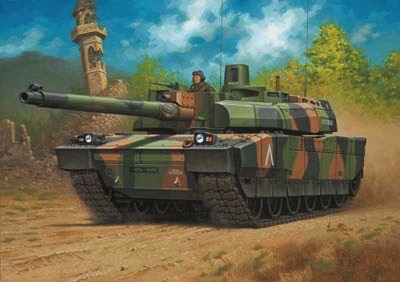 This vehicle that was originally developed by the engineering works at Issy-les-Moulineaux (AMX) under the designation "Engin Principal de Combat" (EPC) and known from 1985 as the "Leclerc", was officially introduced into the French Army on 14th January 1992. This state -of-the-art French battle tank went into production with the French company GIAT. The first regiment to be equipped with the Leclerc was 501/503 RCC (tank regiment) at Mourmelon. It was then produced in series designated by the French T.1 to T.6, which differ from each other only in detail.