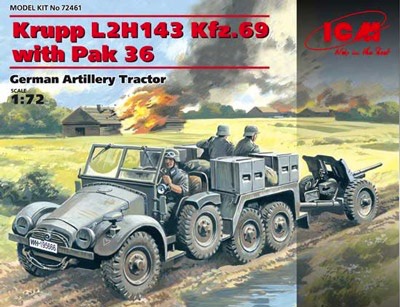 "Krupp L2H143 was one of the most famous German military vehicles in WWII. This 1.5-tons 3-axle (6x4) truck was produced from 1930 to 1942. It had original construction of 4-cylinder air-cooled opposite engine, back-bone frame, and bogie suspension. This truck had its horsepower at 60hp. In German Wehrmacht, Krupp L2H143 was used mainly as light gun tractor (Kfz.69) and also as a personnel transport (Kfz.70). The Krupp Kfz.69 was designed to tow a 3.7cm PaK 35/36 anti-tank gun and could be fitted with ammunition cases. From the begining of WWII, the Krupp Kfz. 69 was employed as standard equipment in anti-tank artillery divisions and was actively deployed to battlefronts in France, Poland, the Balkans, and Russia.

This ICM model was issued with the use of original drawings and photos of the museum machines. This kit has highly detailed chassis, body and suspension. The PaK 36 gun consists of 32 details. The kit also consists of 2 variants of decals: Krupp L2H143 Kfz.69 in France (1940) and in Russia (1941)."