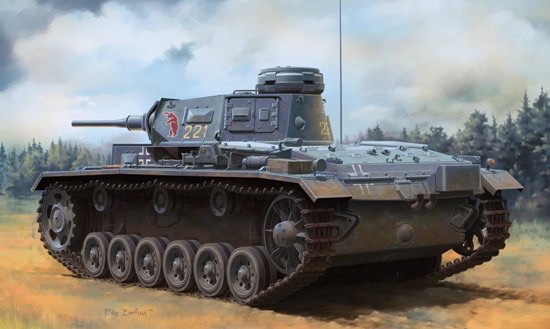 It was planned that Germany would conduct an amphibious invasion of Great Britain under the codename Operation Sea Lion, and to this end a number of Panzer IIIs were especially converted into diving tanks. These were known as the Tauchpanzer III, and they had the ability to drive along the seafloor totally submerged thanks to a breathing apparatus. In the end these tanks were not used to cross the English Channel as it was decided to bring Britain to its knees via the Luftwaffe instead. Dragon's newest 1/35 kit portrays a Tauchpanzer III Ausf.H whcih features the highest level of quality as per all recent members of Dragon's Panzer III family. The box contains all necessary parts to make the diving tank, including waterproofing items for the gun shield and turret ring. There is an array of photo-etched components for adding extra detail too. Furthermore, this tank assembles easily thanks to the inclusion of brand new DS tracks. Even though the Tauchpanzer wasn't used in earnest in the English Channel, they were used during the massive invasion of the Soviet Union. Of course, this opens up modeling opportunities. Modelers will be 'diving' into model shops to obtain this newest Tauchpanzer!