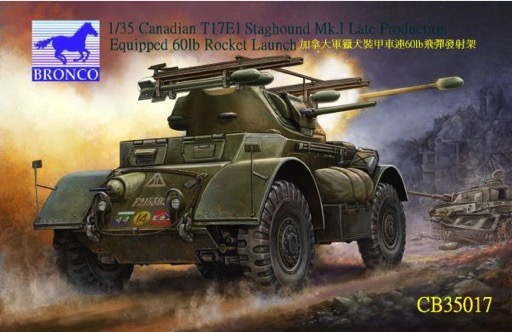 In July 1941 plans were drawn up for a large 4x4 armoured car,by the Chevrolet Motor Company, This car was designated the T17E1 and was ordered by both the US Army and the British Army un January 1942,the British naming the vehicle the Staghound,The Staghound emerged as a 14 ton armoured car powered by 2xGMC6-Cylinder,97bhp petrol engines,with a top speed of 89km/h.Armour was up to 32mm thick,and the car was armed with a 37mm M6 anti-tank gun.The Car was ready for production in October 1942,but shortly after this,the US Army canceled its order.The entire production would go to the British Army where they were primarily used as Command and Control cars in Armoured Car Regiments.However some Armoured Car Regiments,such as the 18th Canadian ACR ,(12th Manitoba Dragoons),used the Staghound as its primary equipment.Some cars of the 12th Manitoba Dragoons were fitted with launch rails to fire aircraft rockets.

The 12th Manitoba Dragoons was the Armoured car Regiment attached to Canadian 2nd Corps fighting in N.W.Europe.The rocket launchers were probably fitted in the winter of 1944/45 as the regiment patrolled the banks of the maas river in Holland.