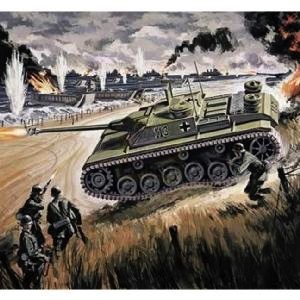 One of a series of assault guns produced by the Germans during the Second World War, the Sturmgschutz G. III was based upon the Panzer III tank chassis and appeared late in 1942. Used to accompany the infantry into the attack, the assault gun's main aim was to knock out pillboxes, machine-gun nests, anti-tank guns and other obstacles. Stug. II's took part in the North African and Russian campaigns as well as the Normandy battles. Armed with a long-barrelled 75 mm Stu. K.40 gun, with an effective range of 2,000 years, the Stug. III weighed 23 tons and had a top speed of 22 mph. Armour thickness varied from 10 to 50 mm. Overall length excluding gun was 17ft 10 in, width 9 ft 8 in and height to top of cupola 7 ft 1 in.