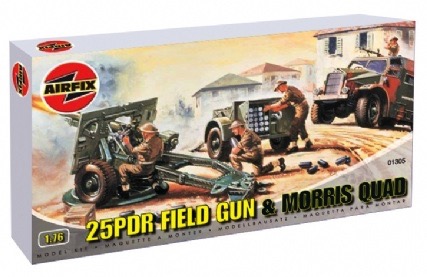 The 25-pounder field gun, or more accurately gun-howitzer was the standard field equipment of the British Army throughout the Second World War. After 1945 the 25-pounder remained in service, seeing action once again in Malaya and in the Korean conflict. The idea of a gun to replace the 18-pounder and 4.3" howitzer and fulfil the dual role of gun and howitzer arose in 1918 and was revived in 1928. A pilot model was made in September 1930 and production began in 1935; the gun was already in service at the time of Dunkirk in 1940. The calibre of the gun is .345" and the 25-pound shell can be fired to a range of 13,400 yards. Shells used can be high explosive, armour piercing or smoke, and instead of using fixed ammunition the 25-pounder employs a separately loaded shell and cartridge, permitting different charges of propellant to be used. The gun and its limber, carrying ammunition, are towed by a "Quad". This is a four-wheeled, four-wheel drive tractor with an excellent cross-country performance and providing seating accommodation for the complete gun detachment.