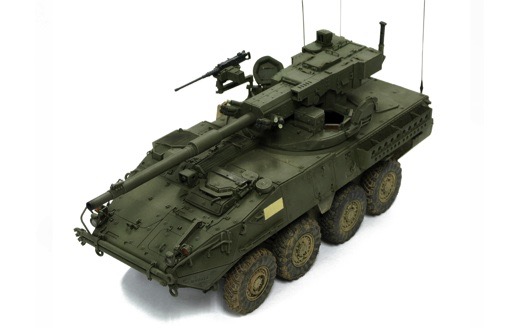 The M1126 Stryker is an eight-wheeled, all-wheel-drive infantry combat vehicle (ICV) weighing between 16 and 19 tons and capable of speeds up to 100KPH, and is the first new ICV to enter US military service since the M2 Bradley back in the '80s. Based on the Canadian LAV III and Mowag Piranha, and named for two Medal of Honor-winning US servicemen in WWII and Vietnam, the modular Stryker can be outfitted to perform a wide variety of missions, such as infantry carrier, reconnaissance, mobile gun system, mortar carrier, command vehicle, battlefield ambulance, and a host of others. The Stryker was first deployed to Iraq in October 2003, where it earned a good reputation with the soldiers operating it. This kit depicts the Stryker in its impressive M1128 MGS (Mobile Gun System) configuration, featuring a 105mm cannon (the same gun as on the original M1 Abrams MBT) packed into a low-profile turret. First deployed in 2006 and designed for infantry support, the M1128 and its crew of three uses high speed and mobility with a 105mm punch to get the job done on the ground.

AFV Club continues to release excellent kits of Stryker variants. The turret and other upgrade parts are all-new toolings and include several options. The main gun barrel is rendered in turned aluminum with plastic detailing and features rifling inside the barrel, along with a functional spring-loaded recoil compensation feature. The complicated suspension system is faithfully reproduced, and the rubber tires have the correct tread pattern and sidewall detail. Photo-etched detail parts are included to further increase the level of realism. Vision blocks and headlights are molded in bubble-free clear plastic. Includes decals for four different vehicles.