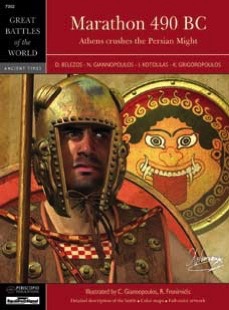 Manufacturer: Squadron Signal
Stock Number: SQU 7002
View all products of type "Clash of Armies"
View all products of type "Battles"
Great Battles of the World; Ancient Times. Athens Crushes The Persian Might. The Battle of Marathon is a landmark in world history. Through their victory, the Athenian and Plataean hoplites did not merely save their cities from destruction, but they also destroyed the myth of the 'invincibility' of the Persians and proved the superiority of their armor, weaponry and tactics. More significantly, they opened the way for the unhindered evolution of Athens into a center of a civilization whose virtues and ideals became foundations of Western civilization. Reveals the causes of the Persian invasion, follows the unknown Marathon runner in his run to announce the victory and relates the captivating myths created by the historical battle that still remain a part of the oral tradition of this epic. Enriched with photographs, maps of the area and tactical battle movements and color illustrations of uniforms. Belezos, Giannopoulos, Kotoulas and Grigoropoulos; 104 pages; English text.