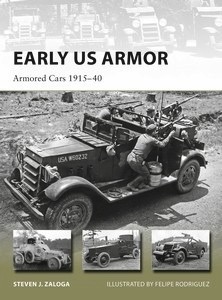 The inter-war years saw considerable innovation and experimentation in armoured car design. Of the 1930s scout car designs, the M3A1 scout car was good enough to be produced in very large numbers in World War II, and was widely exported to many other armies via Lend-Lease. It also served as the basis for the late M2 and M3 armoured half-tracks.

In this study, using detailed full colour plates and rigorous analysis, US armour expert Steven J. Zaloga chronicles the development of the US armoured car in the years leading up to World War II.