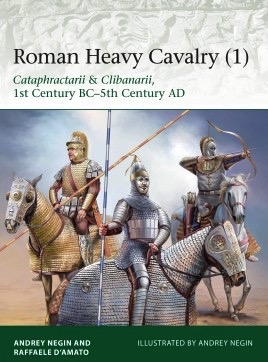 Manufacturer: Osprey Books
Stock Number: OSP ELI225
View all products of type "Armies"
View all products of type "Mobile Divisions"
From the army of Marc Antony in the 1st century BC, Roman generals hired Oriental heavy armoured cavalry to serve in their military alongside the legions. These troops, both from the northern steppes and the Persian frontiers, continued an ancient tradition of using heavy armour and long lances, and fought in a compact formation for maximum shock effect. They were quite distinct from conventional Roman light cavalry, and they served across the Empire, including in Britain. They became ever more important during the 3rd century wars against Parthia, both to counter their cavalry and to form a mobile strategic reserve.

Displaying these impressive and imposing cavalry units using vivid specially commissioned artwork, this first book in a two part series on Roman Heavy Cavalry examines their use over the Imperial period up to the fall of Western Empire in the 5th century A.D.