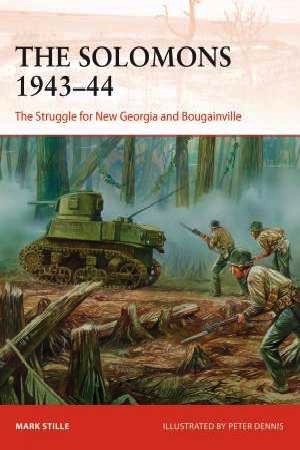 Manufacturer: Osprey Books
Stock Number: OSP CAM326
View all products of type "Campaigns"
View all products of type "Clash of Armies"
Victory at Guadalcanal for the Allies in February 1943 left them a vital foothold in the Solomon Islands chain, and was the first step in an attempt to isolate and capture the key Japanese base of Rabaul on New Britain. In order to do this they had to advance up the island chain in a combined air, naval, and ground campaign. On the other hand, the Japanese were determined to shore up their defences on the Solomons, which was a vital part of their southern front, and would bitterly contest every inch of the Allied advance. The scene was set for one of the bloodiest campaigns of the Pacific War.

Fully illustrated with specially commissioned maps and artwork, this is the compelling story of the struggle for the Solomons, a key part of the Allied advance towards Japan which saw tens of thousands of casualties and so many ships lost that part of the ocean became known as 'Ironbottom Sound'.