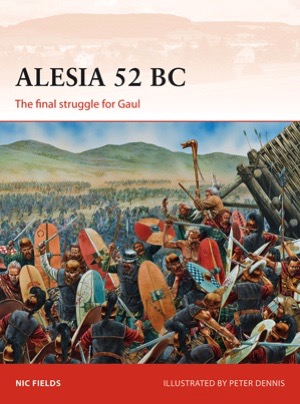 About this book
In 52 BC Caesar's continued strategy of annihilation had engendered a spirit of desperation, which detonated into a revolt of Gallic tribes under the leadership of the charismatic young Arvernian noble Vercingetorix. Major engagements were fought at Noviodunum, Avaricum, and Gergovia, with the last action being the most serious reverse that Caesar faced in the whole of the Gallic War. However, Vercingetorix soon realized that he was unable to match the Romans in pitched battle. Taking advantage of the tribesmen's superior knowledge of their home territory, Vercingetorix began a canny policy of small war and defensive manoeuvres, which gravely hampered Caesar's movements by cutting off his supplies. For Caesar it was to be a grim summertime - his whole Gallic enterprise faced disaster. In the event, by brilliant leadership, force of arms, and occasionally sheer luck, Caesar succeeded in stamping out the revolt in a long and brutal action culminating in the siege of Alesia. Vercingetorix finally surrendered and Alesia was to be the last significant resistance to the Roman will. Never again would a Gallic warlord independent of Rome hold sway over the Celts of Gaul.