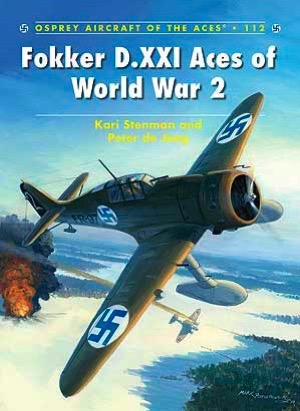 About this book
The Dutch D.XXIs saw less than a week of action following the German invasion of the west on 10 May 1940, with many of the country's 28 fighters being destroyed on the ground. However, those that survived the initial onslaught inflicted losses on the Luftwaffe. By then, however, the D.XXI had found everlasting fame in Finland during the Winter War of 1939-40. Proving itself a real thorn in the side of the Soviets, the fighter, operating in primitive conditions and against vastly superior numbers, Finnish D.XXIs racked up an incredible score against the Red Air Force. The D.XXI also has the distinction of producing the first 'ace in a single mission' in World War 2, when then 1Lt Jorma Sarvanto shot down six Ilyushin DB-3 bombers on 6 January 1940. After spending a year providing home defence and flying coastal patrols during the early stages of the Continuation War in 1941, all surviving Finnish Fokker D.XXIs were relegated to the reconnaissance role, which they performed through to the end of hostilities in September 1944.